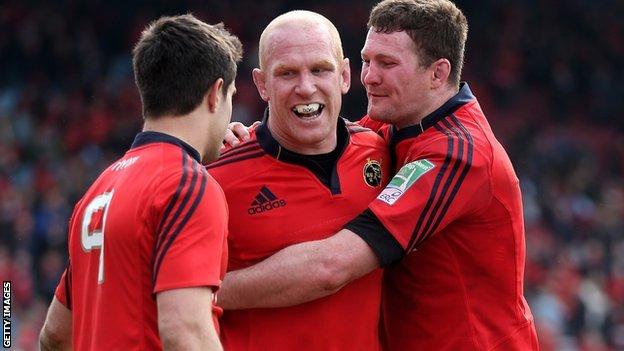 Second row Paul O'Connell took a giant stride towards a third Lions tour as he starred in Munster's 18-12 Heineken Cup quarter-final win away to Harlequins.

O'Connell only returned to action two weeks ago after back surgery.

"He hasn't played a lot recently and will get better with more game-time. By late June/early July, he'll be humming," said Munster boss Rob Penney.

"He is great isn't it? Everyone speaks about him in glowing terms and so they should."

O'Connell, who was described by Harlequins director of rugby Conor O'Shea as "arguably the greatest Ireland lock ever", led the Lions on the 2009 tour of South Africa.

And Penney was delighted to heap further praise on the 33-year-old second row after his shining display in front of 2013 Lions boss Warren Gatland on Sunday.

"First and foremost he is a wonderful man," said Penney.

"He has this empathetic outlook on life - he sees things through other people's eyes, and he has this understanding that makes everyone feel good to be around him.

"You couple that with his rugby ability and he is just a really complete man."

Despite his disappointment at defeat, Quins boss O'Shea was equally full of compliments, describing the Limerick-born O'Connell as "absolutely majestic".