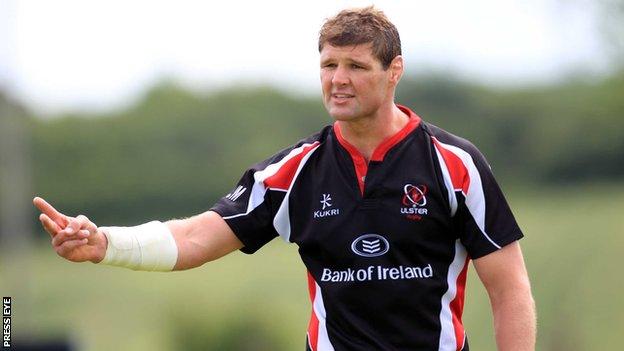 Ulster captain Johann Muller has been ruled out for three weeks after injuring a bicep in Saturday's Heineken Cup defeat by Saracens at Twickenham.

The South African lock suffered the damage to his right arm in the 27-16 defeat in the quarter-final encounter.

Muller will miss the games against the Dragons and Connacht but could return to face Cardiff Blues on Friday 3 May.

Meanwhile, prop John Afoa has returned to New Zealand for a week and will miss Friday's game against the Dragons.

Afoa arrived back from New Zealand two days before the quarter-final after the birth of his daughter.

He missed Ulster's three-day training camp in Fermanagh ahead of the Saracens game.

Muller underwent an MRI scan on Monday amid fears that he may be ruled out for the remainder of the season.

Ulster coaching staff will be relieved that the big Springbok should be available for the play-off stages of the Pro12 if Ulster secure a place in the last four.

Coach Mark Anscombe said he would await a medical report on centre Luke Marshall who took a knock in the Saracens game.

He said Marshall had been passed 100% fit for the match, having recovered from an earlier injury.