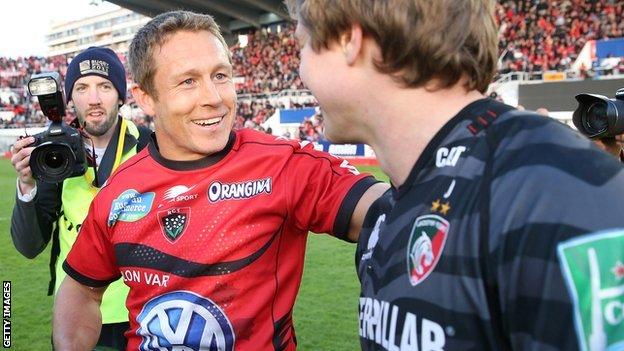 Jonny Wilkinson is relishing a return to Twickenham after guiding Toulon into the Heineken Cup semi-finals with a typically accurate kicking display.

The 2003 World Cup-winner landed six penalties and a last-gasp drop-goal as Toulon beat Leicester 21-15 to set up a last-four encounter with Saracens.

"We'll learn a lot from that and hopefully we can use that knowledge against Saracens," the fly-half said.

"It's great to be back at Twickenham but it's the occasion that counts."

Saracens and Toulon will meet at the headquarters of England rugby in the second of the semi-finals, a day after Munster take on Clermont Auvergne at Stade de la Mosson in Montpellier on Saturday, 27 April.

The 33-year-old former England stand-off, still the second-highest points scorer in Test rugby despite having retired from internationals in 2011, recently signed a one-year extension to his contract with the team from the south of France.

In addition to his kicking excellence, he also made a real impact in defence against Leicester as Toulon reached the Heineken Cup last four for the first time, the fly-half adding that he signed a new contract "for days like this".

"It's a great victory for the club. It was a big occasion and this is a first for us," said the former Newcastle player.

"The joy and desire to play with this team, the energy and togetherness we feel is what has kept me going.

"The atmosphere was a little bit bigger than normal but we deal with similar every week. It's one of the reasons that makes it so difficult to start thinking about stopping playing.

"It was a phenomenally difficult game and it is no wonder Leicester Tigers are always at the top of the Premiership and reaching quarters, semis and finals of the Heineken Cup."

Tigers head coach Richard Cockerill admitted the defeat was hard to swallow but had "no complaints over the result and no complaints with the performance".

"It was outstanding from both sides," added Cockerill, a former England team-mate of Wilkinson's. "It was a good contest and we pushed them all the way.

"We could easily have won. The effort was phenomenal - we never gave up and we were right in it until the end, but Toulon are a very good team and they managed to sneak it."