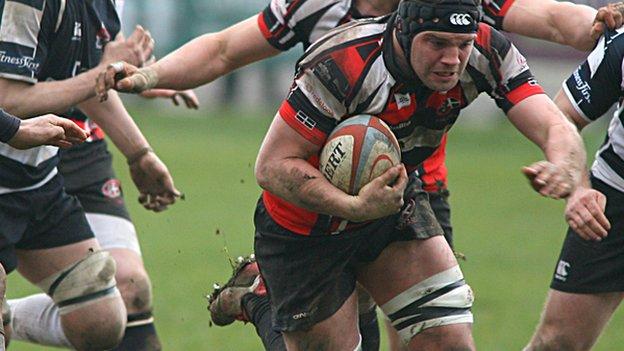 Cornish Pirates head coach Ian Davies was pleased with his side's endeavour despite losing 10-9 to Munster in the British and Irish Cup quarter-finals.

The Pirates, who won the inaugural staging of the competition in 2010, lost out to a late Ronan O'Mahony try.

"It's disappointing to lose by a point in a game that we could easily have won," Davies told BBC Radio Cornwall.

"The endeavour was great and the boys stuck at it. We created chances, but it would have been nice to score a few."

The Pirates took an early lead from the boot of Aaron Penberthy, but Munster replied when winger Danny Barnes went over to put them on the scoreboard.

Penberthy responded with two additional penalties to give the Pirates a 9-5 lead at half-time.

However, they were twice a man down in the second half as both Rob Elloway and Gary Johnson received yellow cards and with pressure mounting, O'Mahony's late try gave Munster the win and a place in the semi-finals.

"First half, we played some really good stuff, but in the second half the penalty count went against us," added Davies.

"Losing Penberthy and [Grant] Pointer through injury cost us our two big kickers which didn't help and we weren't very smart with the line-out given the conditions, but I though Munster defended well.

"Fair play to them, they kept the ball well and kept the pressure on. They weren't coming here to roll over and these guys are at the top of the tree in the sport, so their squad is deep."