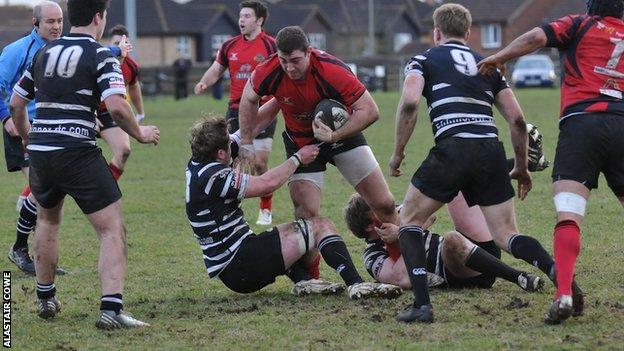 Redruth head coach Adrian Edwards has ruled his side out of the promotion picture following the heavy 65-19 defeat at second-placed Henley.

The home side scored 10 tries to the Reds' three in a ruthless display.

"They have a really good squad and are a very good side but we never gave up," Edwards told BBC Radio Cornwall.

"It's [promotion] gone now. We never set our sights on it in the first place, it was just because we kept winning games that the talk came."

Redruth went behind early in the match when Will Robinson kicked a penalty after the Reds were penalised at the scrum.

Liam O'Neill, Xavier Andre and Matt Payne all ran in first-half tries for Henley as the hosts took a 24-point lead into the break.

O'Neill and Andre added two further tries each and Luke Carter got himself on the scoresheet as the home side put the game beyond Redruth.

Payne added his second and Richard Briggs went over before the visitors rallied late on with tries from Neil Broadbank, Tom Notman and Ashley Hosking.

"We never gave up and scored three late tries which shows something," Edwards added.

"It's been a difficult month as all of the results have come back-to-back for us - had they been more staggered across the season it wouldn't look quite as bad.

"The other teams at the top have greater squad depth and that shows at this crucial time of the season.

"We've had a couple of hard defeats but we've been in the mix for most of the games so we cant be disappointed.

"We've got two home games and one away left and we'll try our best to perform in those games and finish the season on a high."