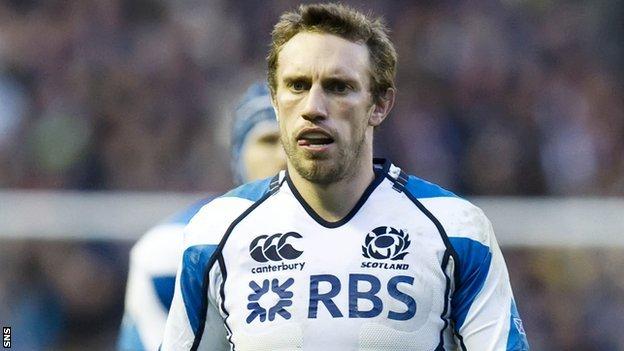 Former Scotland captain Mike Blair will move to Championship side Newcastle Falcons at the end of the season.

The 31-year-old currently plays for French side Brive after moving from Edinburgh in the summer of 2012.

Scrum-half Blair won 85 caps for Scotland before retiring from international rugby, also in 2012.

"There has always been a strong Scottish influence at Newcastle and I'm delighted to continue that tradition," he told the Falcons official website.

"Newcastle has ambitions to challenge in the Aviva Premiership, and although there are still the play-offs to be played, they are in a good position to be promoted and to achieve this goal.

"I am really enjoying my time in France but I feel that playing with Newcastle Falcons will provide me with a rugby challenge that I have been looking for," added Blair.

Edinburgh-born Blair spent a decade with his hometown club before moving to France.

He won his first international cap in 2002, captaining Scotland on 14 occasions, and was called up to the 2009 Lions tour of South Africa as a replacement.