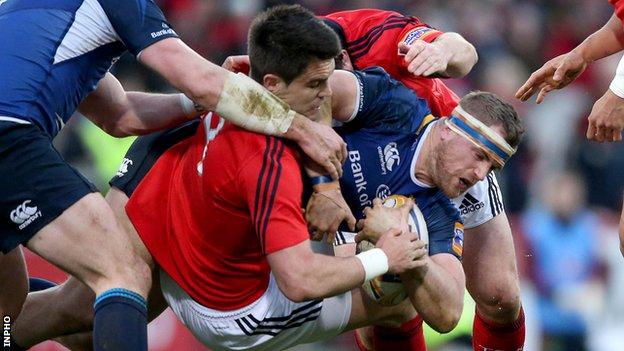 Munster hit back to lead after tries by Ian Keatley and Felix Jones but another Madigan penalty put the visitors 12-10 ahead at the interval.

O'Driscoll, making his first appearance after serving a three-week ban, had few attacking opportunities in the game but he finished off a period of intense pressure to scramble over the line in the 70th minute after his side had gone through 25 phases.

Earlier in the second half, Leinster wing Dave Kearney had to be carried off after Paul O'Connell caught him with a kick to the head while attempting a fly-hack.

The Ireland lock looked to be going for the ball but the incident could catch the attention of the match citing commissioner.

Kearney's brother Rob looked to have scored an early try as he beat Donncha O'Callaghan in a foot race after Isa Nacewa's kick-ahead but the television match official ruled that the full-back hadn't grounded - to the Ireland's star's disbelief.

However, the early Leinster pressure yielded Madigan's opening penalty and the in-form fly-half slotted two further kicks to increase the away team's lead to 9-0 by the 20th minute.

Munster opened their account a minute later as Keatley touched down after Damien Varley had turned over possession following Nacewa gathering the fly-half's initial chip behind the defence.

Keatley again missed a difficult conversion and Leinster's lead was restored by the break after another Madigan penalty.

Munster pressure after the restart yielded two successful penalties for Keatley ,which moved them four points ahead.

But the margin was back to the minimum in the 49th minute after another Madigan kick.

The next 20 minutes did not produce a score with play being held up for a couple of minutes following the injury to Dave Kearney, the Leinster wing sustaining his injury as he attempted to lay the ball back following a tackle.

With the ball barely out of Kearney's grasp, O'Connell attempted to kick ahead but also made contact with Kearney's head.

As the match entered its final 10 minutes, Leinster produced intense pressure spurred by some clever scrum-half play from man of the match Isaac Boss.

The 25-phase period of play was finished by O'Driscoll getting into one of his trademark low-body positions to score the crucial try.

After Madigan added the conversion, Munster responded with some late pressure but Leinster held firm to take a victory that moves them up to second place in the table.