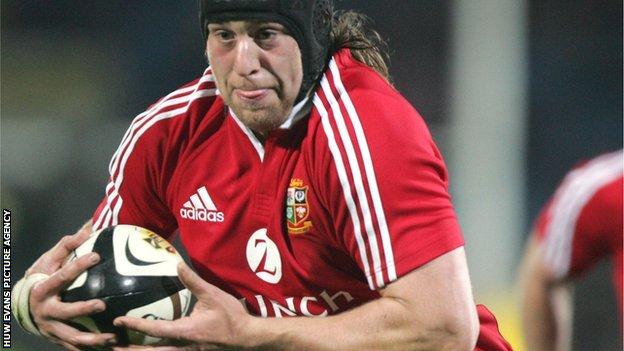 Ryan Jones is making a quicker than expected recovery from a broken shoulder and hopes that will count for British and Irish Lions selection.

The Wales captain was injured in Wales' 28-18 win over Scotland and missed the Six Nations decider against England.

The 32-year-old was expected to be out for six to eight weeks, but a month on he has been cleared by doctors to return to training.

"I'm back running and doing some weights and a month down the line from that dreadful day at Murrayfield things are looking good."

Jones was called up to the 2005 Lions tour to New Zealand as a replacement for injured Scotland number eight Simon Taylor, but forced his way into the Test side to win three caps.

The Osprey hopes he could be available for the Pro12 game away to Glasgow on 19 April, but is realistic that he may have to wait for the trip to face Leinster on 3 May.

Lions coach Warren Gatland will name his squad on 30 April and if Jones does not figure in the Glasgow game then he will have to hope that he did enough during the Six Nations to book his place.

The Leinster trip is the final game of the Pro12 regular season, although if Ospreys qualify for the play-offs Jones could have up to three additional games to regain match fitness and prepare for the Lions tour to Australia - if selected.

"Ideally, I would be looking to play over the weekend of the 27th and 28th April, but unfortunately, it's the Heineken Cup semi-finals and we are not in it," Jones added.

"Because of that, I have thought about aiming for the weekend before against Glasgow. I've got an outside chance, but obviously, I won't rush things if it's not the right thing to do.

"If not, I will certainly be there for the game against Leinster over the first weekend in May."

After his first taste of the Lions in 2005, Jones was again called up four years later in South Africa as a replacement only to be ruled out by a head injury suffered playing for Wales on their tour of the United States and Canada.

As always for a Lions tour there is fierce competition for places, but Jones - whose versatility as either a back-row or lock could count in his favour - is desperate to secure a call-up.

"I know that players are reluctant to speak of the Lions, especially when they are caught up in a busy Six Nations season," said Jones.

"However, it's always there in the back of your mind and I'm certainly no different to anyone else.

"I have thought about it since the beginning of the season and I'm still thinking about it now. I suppose the news that I've had this week helps, because now I've got an opportunity that I didn't believe I would have."