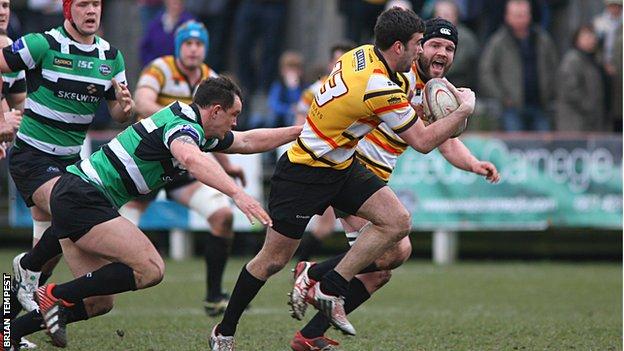 Cornish Pirates head coach Ian Davies has admitted his side are unlikely to finish in the top four of the Championship this season.

Pirates have lost four of their last five league matches and were knocked out of the British and Irish Cup by Munster on Sunday.

"To be honest the top four is out of our grasp now if I'm being realistic," Davies told BBC Radio Cornwall.

"We've got to go out and try to finish the season on a high."

Pirates face Rotherham on Wednesday in a re-arranged fixture after last month's original staging of the game was postponed due to snow.

"It's not ideal to have to travel midweek and again at the weekend," he added.

"We played very well against them last time and their coach had just left which didn't help them.

"We've got a number of changes from the weekend so it's going to be tough, when we've gone there in the past with a full strength squad it's always been a battle.

"We spoke yesterday and set our goals for the next three games and if we achieve those goals the crowd will be royally entertained."