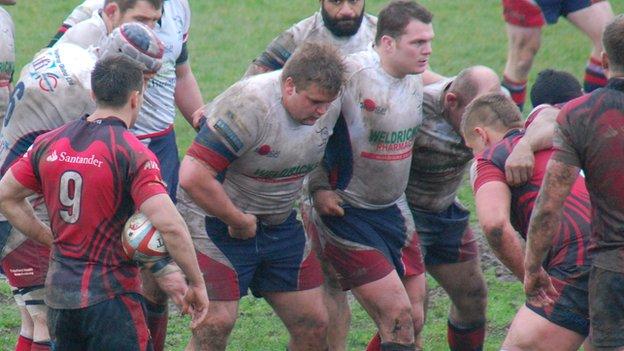 Doncaster are on the verge of relegation from the Championship after a nail-biting 13-10 defeat at Jersey.

The win for the islanders, thanks to first-half tries from Fred Silcock and Guy Thompson, all but guarantees them another season in the second tier of English rugby.

Knights fought back in the second half with Ben Sowery's pushover try.

Fly-half Jamie Lennard then missed a last-gasp penalty which would have squared the game.

Knights are nine points adrift of Jersey and, to achieve survival, they now need to win their last two games with bonus points and hope their closest rivals pick up no points from their final-day encounter with Cornish Pirates.

The hosts made the brighter start and took the lead early on when Silcock crashed over after pressure from the forwards.

Lennard's penalty kept Doncaster in touch, but Jersey's top scorer Thompson accelerated through the Knights' defence to seize back the initiative and Le Bourgeois' penalty made it 13-3 at the break.

There were to be no further scores from the islanders though, in front of a season's best St Peter crowd of 3,154.

Just before the hour mark, replacement hooker Sowery went over and reduced the deficit to three points, setting up a nervy conclusion particularly when Silcock was shown red in the closing moments for a tip-tackle.

Lennard had a chance to grab a draw for Knights but his penalty at the death went the wrong side of the post, and the home crowd could breathe a sigh of relief and probably look forward to a second season in the Championship.

Doncaster's fate will be sealed if they fail to get a bonus-point win against Bedford on Wednesday night.