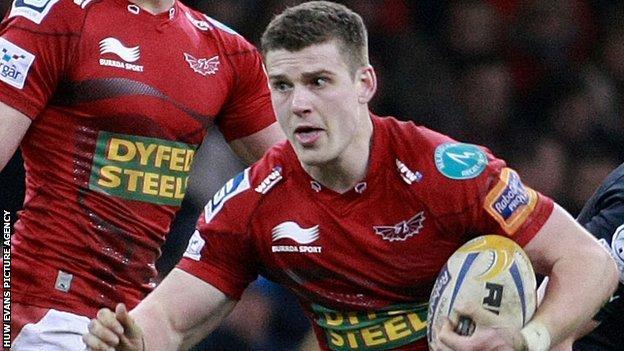 Wales centre Scott Williams has signed a contract extension to remain with the Scarlets.

The 22-year-old's current deal with the west Wales region was due to expire at the end of this season.

"I've always wanted to stay at the club," Williams said after Scarlets' 29-6 win over Glasgow.

Williams, who has been capped 20 times by his country, added: "It was an easy decision.

"I'm happy where I am at the moment - outside of rugby and in rugby - so going anywhere else wasn't really an option for me.

"There were options but I told [my agent] I didn't want to [leave]."

Williams' new contract came days after the announcement team-mate George North will leave the Scarlets and join English side Northampton at the end of the season.

Williams has had to play second-fiddle to the established Wales centre partnership of Scarlets team-mate Jonathan Davies and Jamie Roberts, who will leave Cardiff Blues to join a team in France - possible Racing Metro - in the summer.

But in Wales' victorious 2013 Six Nations campaign, Williams came off the bench to make contributions against France, Italy, Scotland and England.