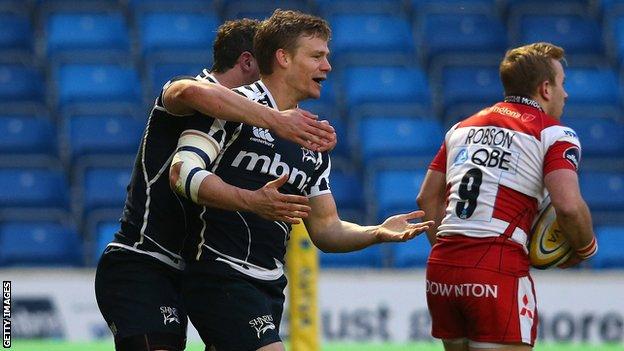 Gloucester's play-off hopes were severely dented by Sale, who took a massive step closer to survival with victory at the Salford City Stadium.

Johnny Leota and Dwayne Peel crossed within seven minutes of kick-off and Cameron Shepherd's try extended Sale's lead to 22-6 at the interval.

Freddie Burns kicked three penalties for the visitors, who missed the chance to go third in the Premiership.

The defeat for the Cherry and Whites, who remain fifth in the table having failed to claim a losing bonus point, confirmed leaders Saracens as the first team to definitely qualify for the end-of-season play-offs.

Meanwhile, Steve Diamond's side moved above London Irish and into 10th position with the win and are almost certainly safe from relegation following a fourth success in five home league outings.

Bottom club London Welsh must win their final three matches, at least two of them with bonus points, to stand any chance of overhauling the Sharks.

Sale got off to the perfect start as they profited from two kicking errors.

A rampaging Leota charged down Dan Robson's kick and chased down the loose ball to score after just 54 seconds, before former Wales scrum-half Peel touched down in identical circumstances having blocked Rob Cook's attempt to clear.

Gloucester, who lost hooker Huia Edmonds to a knee injury during the first half, kept in touch with two Burns penalties.

Although the visitors looked strong in the scrum early on, their passing was loose and they rarely threatened the Sale line in the first half.

But after Nick Macleod had made it 15-6 with a successful penalty, full-back Shepherd did cross on the stroke of the interval to put Sale in real command.

The Australian - who made his debut in the in November - collected Sam Tuitupou's suspiciously forward pass and darted past Cook to score, although it was only awarded after being referred to the television match official.

Another Burns penalty reduced the deficit to 13 points, but after weathering a spell of Gloucester pressure, Leota broke through again.

The big centre was denied a second try by the TMO, who also deemed that Koree Britton had been guilty of a stamp on Sale skipper David Seymour within sight of the line.

From the resulting penalty, Charlie Amesbury was unable to control Danny Cipriani's offload as the hosts searched for the killer blow.

It came after Gloucester lost replacement Dave Lewis to the sin bin for an infringement, and Sale took advantage of the extra man as Peel broke down the blind side of a maul to clinch the bonus point.

Finally, Cueto set the seal on a superb victory by collecting Cipriani's kick and outpacing the visiting back line to all but clinch Sale's survival.

"I think the form we've shown since Boxing Day beared fruit tonight. The defence was outstanding, whereas it was non-existent against London Irish.

"I think keeping the club in the Premiership is a great achievement and the players take a lot of the credit.

"A lot of things will be reviewed at the end of the season but the ground's becoming a home now. We moved to a new stadium, we had new coaching staff and we probably weren't as stable behind the scenes as we should have been.

"We got pretty much nothing from seven or eight games, apart from one bonus point, so we've come from a point where everything had to be put together. We had to really fight and get the players to care."

"Overall, that was hugely disappointing. We conceded two soft tries and never really recovered from that.

"We weren't good enough and I have to give credit to Sale - they played well.

"This team is a lot better than they showed tonight and that's the disappointing thing.

"It's amazing that we can come from the heights of Harlequins and then put in a performance like that."