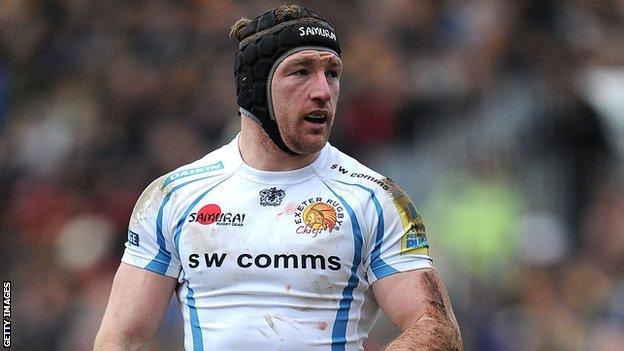 Tries from Matt Jess and replacement David Ewers helped Exeter seal a convincing win over London Irish to move up to sixth in the Premiership.

Gareth Steenson had kicked all of Chiefs' points when they were 15-3 up after 52 minutes.

Jess and Ewers then scored the only tries of the game as the visitors moved above Bath, who lost at Harlequins.

Tom Homer and Ian Humphreys scored the Exiles' only points of the afternoon, kicking a penalty apiece.

The win means Exeter have enhanced their chances of securing a Heineken Cup berth for next season, while the Exiles are still not mathematically safe from relegation.

After Steenson had kicked his fifth penalty of the afternoon, and Humphreys had responded with one for Irish, Chiefs finally found the try-line.

The Exiles were penalised for illegally pulling down a maul, after being driven back 25 metres, and Haydn Thomas found Steenson, who then flicked the ball for Jess to touch down.

Steenson missed with a touchline conversion before Ewers barged his way over in the last minute and Henry Slade was successful with the resulting conversion.

"It looks a very comprehensive Premiership win but really it was one heck of a battle.

"It was all about knuckling down, sticking in there and keeping working hard and we did that really well - that's what pleases me the most.

"London Irish stood in front of us today and made it very difficult. A good side will get its moments in your third, it's how you deal with them that ultimately can decide games and I thought today we dealt with what they brought to the game.

"Whenever you play away and the opposition wins the toss at a ground like this, where the wind goes straight down the park, you expect the home team to run in to the wind in the first half but they called the shots that we would.

"We felt they clearly thought they wanted to knock us off mentally in that first half by rattling up a score and us getting squeezed and playing catch-up.

"We based a lot of our game plan around strong scrummaging and driving but to be fair they stopped us in our tracks."