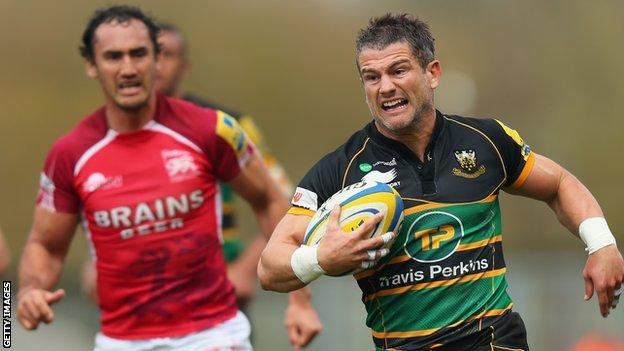 London Welsh have been relegated from the Aviva Premiership after Northampton Saints secured a bonus-point victory.

Welsh, in their first season in the top flight, took a surprise lead when Nick Scott finished under the posts.

But Saints replied with two quick-fire tries from Tom May plus a score from Luther Burrell before the break.

Daniel Browne's pushover try gave the home side hope but Burrell added his second try late on to condemn the Exiles to bottom spot in the table.

The 12-point gap between Welsh and London Irish is insurmountable with two games to play, although there remains a thin prospect Welsh will retain their top-flight status if the winners of the Championship play-offs fail to meet the Premiership's qualification criteria.

However, as it stands Newcastle Falcons, last year's relegated side, look favourites for an instant return.

Welsh's survival bid was hampered by

While only time will tell if that punishment will prove to be the decisive blow, a 10-match losing run following a promising first half to the campaign has cost the Exiles.

Saints, focused on strengthening their grip on a play-off position, took an early lead courtesy of a pair of Stephen Myler penalties.

But the visitors, who had already been warned by Seb Stegmann's failed breakaway, were rattled when Sonny Parker claimed a loose pass and fed Scott for a counter-attack score.

It was as good as it got for the hosts, though, as Northampton regained their lead through a Myler penalty and drew clear with May's brace.

The 34-year-old, an early substitute for the injured George Pisi, went over in the corner for his first and then belied his years with a blistering charge for his second.

After the break, Ken Pisi had to produce a last-ditch challenge to deny Stegmann, before showing good hands in the build-up to Saints' third, which was finished when Brian Mujati's classy offload released Burrell.

Northampton director of rugby Jim Mallinder will be frustrated that his side conceded a late pushover try, allowing the Welsh scrum over their line for Browne to touch down.

But Saints claimed a bonus point when Burrell crossed late on to leave the Exiles contemplating a return to the Championship.

"You have got to take it one step at a time. It's the Championship for us.

"We've been there before, we understand the league. It is a two-year cycle, and we are halfway through.

"You concentrate on what you can influence and that is what I have been trying to do here.

"I have tried to make sure the players approach the game in as professional a manner as they possibly can and do their jobs. On the field, we've been competitive.

"There is lots of spirit and lots of good at London Welsh and we need to build on that. It is not about getting knocked down, it's about how we get up and address the coming months."

"Clearly, they've come in and been a credit to the Premiership. They've pushed a lot of teams close and got some scalps at home.

"I think they have come in and tried to play some rugby. They've been a good addition to the Premiership."