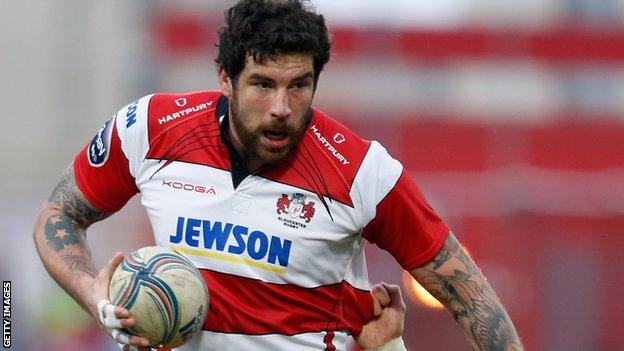 Gloucester captain Jim Hamilton is set to be sidelined for at least two weeks with an ankle injury.

The Scotland international lock is in his final season at Kingsholm, having agreed a move to Montpellier next term.

With just three games of the regular Premiership season remaining, Gloucester are hoping the 30-year-old is fit enough to see out his tenure.

"It's not too serious but he will be out for two or three weeks," coach Carl Hogg confirmed to BBC Gloucestershire.

Hamilton was taken off with the injury five minutes into Gloucester's 17-15 win over Harlequins on Good Friday, and missed last week's Amlin Challenge Cup defeat by Biarritz.

The Cherry and Whites finish the regular season at Exeter on 4 May but remain in play-off contention and currently sit fifth in the standings, level on points with fourth-placed Northampton.

Hamilton has been at Kingsholm since 2010, having previously had spells with Leicester and Edinburgh.

The West Country club announced in December that the second row forward would be leaving in the summer for France, and Hamilton later confirmed he had agreed a deal with Top 14 side Montpellier.