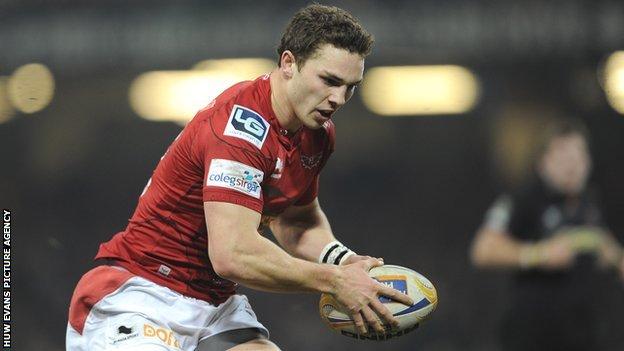 Scarlets head coach Simon Easterby believes that Wales wing George North has been "singled out" as part of the ongoing dispute in Welsh rugby.

The row between the four regional teams and the Welsh Rugby Union flared again last week when it accused the Scarlets of trying to sell North to French clubs without the 20-year-old's knowledge.

North has instead joined English Aviva Premiership side Northampton.

"He's a young man that's got a lot of things going on," Easterby said.

"But he's dealing with it and the players are supporting it.

"I suppose he's been singled out a couple of weeks ago, which isn't ideal with all this dispute that is going on, but he's handling it well."

Shortly after Northampton confirmed they had held talks over signing North, the winger scored two tries in the Pro12 win over Newport Gwent Dragons at the Millennium Stadium.

And Easterby added: "He showed that he was focused on his rugby and that is what has put him in this position.

"So it's important that we leave him to get on to do that and we try and focus on what's most important, and that's getting back in that top four."

With leading Wales players such as Jamie Roberts, Dan Lydiate and North leaving to join richer foreign clubs, the subject of funding at the Welsh regions is a key issue in the dispute with the WRU.

The four Welsh regions have declined a WRU invitation to attend a meeting to discuss the central contracting of players.

"You've got to play with the cards you're dealt and I don't think we're the only club or region in Wales that is short of finance compared to others in Europe, and in our league even," added Easterby.