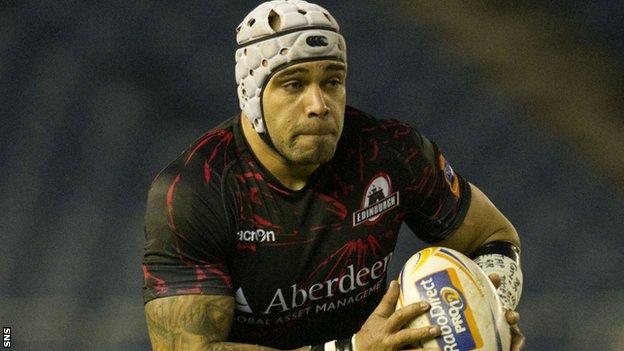 Edinburgh number eight Netani Talei will leave the club when his contract expires in the summer.

Since joining from Worcester Warriors in 2010, the Fijian has made 51 appearances for the Murrayfield side.

The 30-year-old said: "It's that time in the season and I'm at a point in my career when players often look for other opportunities.

"While I'll miss a lot of great friends at the club, I'm looking forward to the next challenge in my career."

I want to leave the club on a high and help them win the next three games.

Talei added: "But the season isn't over for for me yet. I want to leave the club on a high and help them win the next three games.

"I'd like to thank the club, the coaches, the players and the fans for making me feel right at home Edinburgh for a fantastic three years.

"I'll always be a fan of the club and wish them all the best in the season ahead. Vinaka and God bless."

Talei helped Edinburgh reached the 2011-12 Heineken Cup semi-finals, picking up three man-of-the-match awards for a trio of try-scoring outings in the pool stages of the competition.

Interim head coach Stevie Scott said: "Netani is a popular figure with fans who has been a great asset to Edinburgh Rugby over the years.

"I'm sure all the club's fans will join us in wishing him all the best in the future."