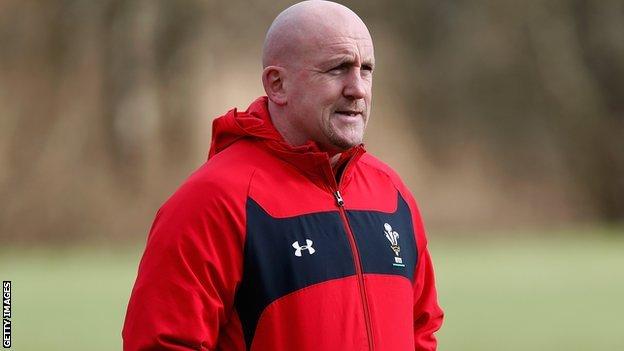 Wales lock Alun Wyn Jones says defence coach Shaun Edwards has the attributes to be a head coach of a national side.

"You look at the success we've had with Shaun, he's probably deserving of a post of that nature," Jones said.

Declan Kidney has left his post as Ireland head coach after the Irish Rugby Football Union decided not to offer him a new deal following a disappointing Six Nations.

Queensland Reds coach Ewen McKenzie has confirmed he would be interested in succeeding Kidney, while also in the frame is former Wales coach Mike Ruddock - who is Ireland Under-20 coach and has just led Lansdowne to the All-Ireland League title.

Although Ospreys lock Jones believes Edwards has the credentials to lead a national side, he would be disappointed if the Englishman was to quit the Wales set-up.

"He's one of the most colourful coaches I've ever had - entertaining and honest. If he did go he would be very hard to replace," Jones added.

"To see him go would be disappointing."

The former Great Britain and Wigan rugby league player was appointed Wales defence coach in 2008 and they won the Grand Slam that year. He is under contract until the end of the 2015 Rugby World Cup.

Wales reached the semi-finals in 2011 and another Grand Slam was secured in 2012.

Edwards played a prominent role in this season's Six Nations triumph, with Wales conceding only three tries throughout the tournament.

Previously Edwards had worked with Wales head coach Gatland at London Wasps, during which time the club won the Heineken Cup twice.

The 46-year-old revealed he almost quit rugby union after being overlooked by Gatland for this summer's British and Irish Lions tour.

Lions head coach Gatland opted for another ex-rugby league man, England's Andy Farrell, as his defensive coach for the tour to Australia.

But Edwards said Wales' Six Nations triumph justified his decision to continue in rugby union rather than opt for the Australian Rugby League.