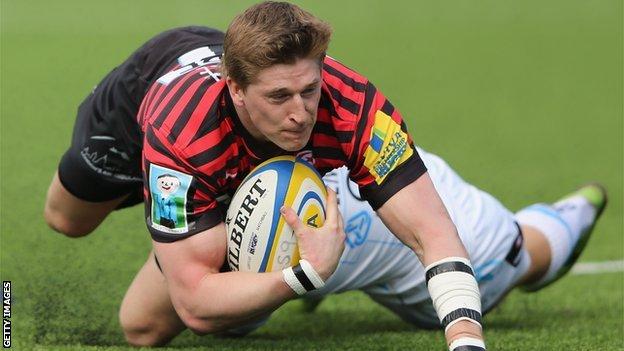 David Strettle scored a first-half hat-trick as Saracens thrashed Worcester to secure a home semi-final in the Premiership play-offs.

Strettle crossed three times in 13 minutes as they built a 23-3 lead.

Tries from Josh Drauniniu and Matt Kvesic gave Warriors hope, but Carlos Nieto, Chris Ashton and Jackson Wray made sure of the bonus-point win.

And it was no more than Saracens deserved after an impressive display at Allianz Park.

Gray, included in the squad in place of Andy Goode, gave Worcester an early three-point advantage.

And although Saracens rested Owen Farrell, Schalk Brits, Steve Borthwick and Ernst Joubert, they were firmly in control.

Hodgson nullified Gray's score with the first of his three penalties, before Strettle forced his way over in the corner to score his first try, converted by Hodgson.

The England winger raced from halfway to add a superb solo effort, and followed it up with a third try, this time a simple run in after good work from Kelly Brown.

Worcester showed some fight just before the break when a strong run from Alex Grove created a try for Drauniniu, converted by Gray.

Saracens scrum-half Neil de Kock was forced off at half-time with an injury to his face following a challenge from John Matavesi.

But Worcester's spirited comeback continued in the second half, with Gloucester-bound Kvesic driving over and Gray once again kicking the extras.

But Sarries responded and a driving line-out try was touched down by Nieto and converted by Hodgson.

Ashton and Wray added further tries, and Hodgson landed the kicks, to complete the rout.

On De Kock's injury: "It was a horrendous challenge. We could have lost our scrum-half with a broken jaw or cheekbone.

"Fortunately he seems to be ok but it looked pretty deliberate to me. I leapt up as I felt it could have been a deliberate game ploy from Worcester.

"The result showed the depth of our squad as we backed up well after a testing European quarter-final at Twickenham.

"We took our chances. David Strettle's second try was as good a finish as you will see but though we are happy with the win, we played well below our standard."

"It was a very clumsy challenge from Josh but he's not a malicious player.

"It was badly mistimed and a citing seems likely. Josh has apologised and I fully understand Mark's reaction to protect his player.

"We had a very poor. slow start but got our second wind just before half-time and they were a bit rattled when we got it back to 27-17.

"We didn't deserve to lose by such a big margin as we gave away two soft tries at the end, trying to run from an impossible position."