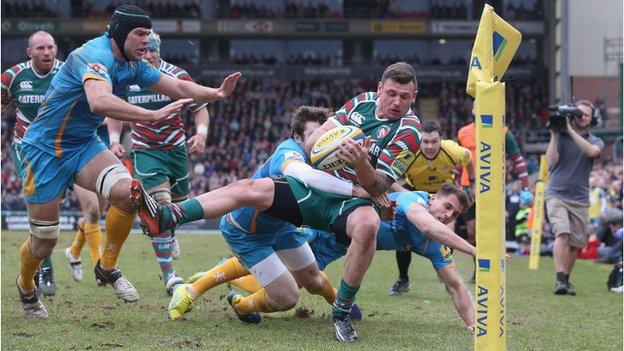 Leicester Tigers guaranteed themselves a Premiership play-off place with a bonus-point victory over Wasps.

With Wasps' Tom Bell in the sin-bin, Youngs added his second before Adam Thompstone increased their advantage.

Elliot Daly crossed to reduce the deficit for the visitors, with Bell landing his third kick of the game.

The result will go a small way to easing Leicester's pain of last week's Heineken Cup quarter-final defeat by Toulon.

The Tigers, who lined up without forward trio Marcus Ayerza, Tom Youngs and Tom Croft from that loss in France, were in control from the start.

Flood's brace of kicks were followed by a pair of quickfire tries, with Youngs darting over from a ruck and Kitchener crossing after a slick Leicester interchange.

Bell kicked a penalty for Wasps, only for Hawkins to finish off a rolling maul for Leicester's third try.

And Bell had time to send over one more penalty before being sent to the sin-bin for a deliberate knock-on.

Youngs crossed from the resulting scrum and Thompstone charged down the wing for the Tigers' fourth, either side of a Daly penalty.

Daly was able to add Wasps' sole try as the game drew on, but Leicester were too far ahead and can now prepare for a play-off campaign.

"A home semi-final is in our grasp. We will go to Bath to win and we want to win at home to London Irish.

"We want to finish top if we can. We'll have to rely on Saracens slipping up somewhere, but they are fighting on two fronts. Let's hope they win Europe, and wear themselves out.

"It was a half-decent performance, certainly the first 45 minutes or so.

"There was a danger we would be flat after the last couple of weeks but it was job done, five points.

"We have guaranteed ourselves a top-four spot and one win out of two will give us a home semi, so we are exactly where we need to be."

"They were a lot better than us. It was disappointing we could not handle their physicality, both in attack and defence.

"I am struggling for positives a bit. In the second half we showed a bit of guts and determination but in all honesty the game was over by then."