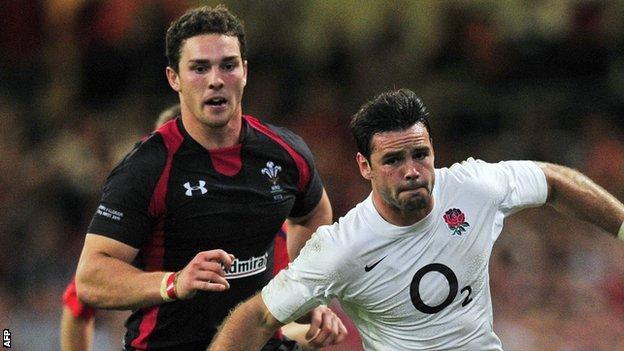 Northampton full-back Ben Foden believes Wales winger George North can "do wonders" for Saints when he arrives next season.

North, 20, will leave Scarlets in the summer to

"Bringing a big name like George to the club will do wonders," England back Foden told BBC Radio Northampton.

"He's a great player - a monster of a man. Hopefully I can work my magic and create some opportunities for him."

North, who has 31 caps for his country and is a two-time Six Nations winner, has displayed his finishing ability for Scarlets this season, crossing nine times in 10 RaboDirect Pro12 matches.

Saints have lacked a regular try-scorer since Chris Ashton's departure to Saracens in pre-season and Foden hopes North can fill the void left by the England winger.

"Hopefully he'll make a few holes for myself when players are thinking 'who are we going to tackle?'," said the 27-year-old.

"When you play with good players you get an understanding and that was something I created with Ashton - we learned about each other inside and out.

"That is something I hope to do with George. I look forward to creating that bond and causing defences a lot of problems."

Saints had previously secured deals for and for the 2013-14 campaign.

And chairman Leon Barwell believes their latest addition is also a sign of their ambition.

"George is a world-class player and to be able to attract somebody of his calibre, at only 20 years old, is fantastic news for us.

"I think we've made two or three really good signings, with Corbisiero, Kahn and Ma'afu," he said.

"There's a couple more announcements to follow quite shortly. As an overall package we've had a good run on signings."