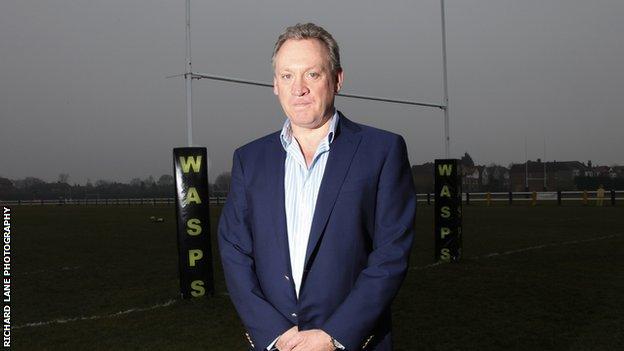 The Premiership side had been owned by

The club has struggled financially since former owner

"I am excited to have become involved with London Wasps, a club I believe has a fantastic opportunity to move forward on and off the pitch," said Richardson.

Richardson's business background is in insurance and he made a reported 35m euros (£30m) from the sale of his 123.ie company in 2010.

"I see my involvement as a big responsibility and this is a long-term challenge which I want to meet head on," he added.

"The club has been through some tough times but I am confident that, with the right management and commercial focus, new investment can really reinvigorate everything about London Wasps.

"Financial stability is our immediate focus and our aim is to become a self-sustainable business within a number of years."

Wasps, who narrowly avoided relegation last season, continue to share Adams Park with football side Wycombe Wanderers, but Richardson has said building a new venue, preferably in west London, is the priority.

"We are not interested in a groundshare, which is prohibitive in terms of helping us to become self-sustainable," he said.

"We are currently looking at sites and co-ownership options. Ideally we believe that West London is a natural future home for London Wasps but we are exploring lots of options at a very initial stage at the moment."

Richardson will not have a day-to-day role at the club and a new board will be put in place over the coming days.

Chief executive Nick Eastwood said: "It is fantastic news for everyone involved with London Wasps that today we can put a full stop to the uncertainty that has hung over the club in recent years.

"While we have managed to make some progress this season financially, Derek's involvement from here on in means that our business is now in very safe financial hands.

"He has an excellent track record in developing successful businesses and he sees a real opportunity to take this club forward through sound investment and a smart commercial strategy.

"A key piece of the jigsaw in ensuring that London Wasps becomes a sustainable business will of course be owning or co-owning our own stadium, although that is much further down the line."