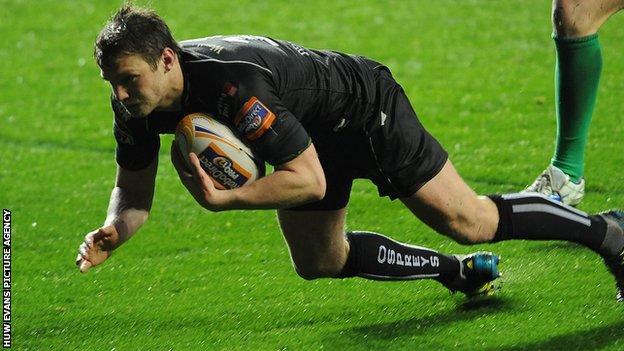 The Ospreys kept their hopes of securing a Pro12 play-off place on track with victory over Treviso.

The reigning champions jumped back into the fourth and final play-off spot by beating their Italian visitors.

Wales international fly-half Dan Biggar, wing Ben John and scrum-half Rhys Webb all crossed for tries for the home side at the Liberty Stadium.

The win ensured Ospreys moved back ahead of arch-rivals the Scarlets into the play-off places.

The Scarlets had kept themselves in the hunt with their comfortable 29-6 victory over Glasgow Warriors on Friday.

Ospreys responded with a ninth successive home victory in the Pro12 and they kept their record of never having lost to Treviso at the Liberty.

The Italians, who are seventh in the table and ahead of both the Cardiff Blues and the Newport Gwent Dragons, arrived in Wales having won their last three league games and having already beaten the Ospreys twice this term.

Both those wins, one in the Pro12 and one in the Heineken Cup, came on Italian soil, with Ospreys beating Treviso 38-17 at home in European competition.

Scrum-half Kahn Fotuali'i was a late withdrawal through illness with Rhys Webb coming in, while prop Dmitri Arhip was on Moldova Test duty against Poland in a 2015 World Cup qualifier and was replaced by Cai Griffiths.

Biggar and Botes both missed a penalty each before the Wales international fly-half slotted over three penalties to put the Ospreys 9-3 ahead midway through the first half.

The game then took a bizarre twist when the Ospreys were awarded a try after a comedy of errors by Treviso.

Wing John thought he had blown a try-scoring chance after a slick passing move by the Ospreys saw him tackled into touch on the Treviso tryline, but the visitors then managed to hand their hosts one of the simplest tries you will see on a rugby field.

Treviso centre Tommaso Iannone decided to take a quick thrown-in to scrum-half Botes but his scuffed kick ended up back in John's arms and he only had to touch the ball down to score.

Irish referee Dudley Phillips went to his video referee to check he could award the score and the Ospreys went in 14-3 ahead at half-time.

After the break, Biggar stretched his side's lead when he latched onto a loose ball to slide in for an opportunist try. He added the conversion to make it 21-3 midway through the second half.

The Welsh side did find themselves with an extra man after Treviso's replacement prop Bees Roux was shown a yellow card for a professional foul at the tackle area, but they failed to capitalise and did not score a point when they had the numerical advantage.

Scrum-half Webb crossed for the Ospreys' third and final try, which Biggar converted, to seal a vital win for the last season's champions.

The Ospreys are level on points with Scarlets for the fourth play-off spot and now face two tough trips to Leinster and leaders Glasgow.