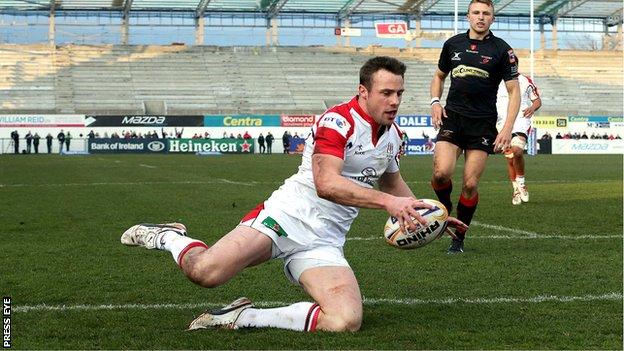 Ulster returned to the top of the Pro12 after an impressive bonus-point win over the Dragons at Ravenhill.

Tommy Bowe scored the opening try on his first start since December before Stuart Olding and Darren Cave touched down as Ulster took control.

The hosts led 24-0 at the break and Paul Marshall nipped in for the bonus-point try while Tom Prydie went over for a consolation try for the Dragons.

Ulster take over top spot from Glasgow, who lost 29-6 to the Scarlets.

The Irish side made a sluggish start as they looked to bounce back after last weekend's Heineken Cup quarter-final defeat by Saracens.

However, the Dragons failed to capitalise as Prydie missed a penalty in front of the posts after two minutes.

An error-strewn period preceded Ulster dominance from midway through the first half, with Bowe scoring the opening try on 24 minutes.

Nick Williams fed Paul Marshall from a scrum and the scrum-half's perfectly time pass sent Bowe charging over in the corner.

Ruan Pienaar added the extras from wide and Ulster took full advantage when Dragons fly-half Dan Evans was yellow-carded for dissent after the hosts were awarded a penalty on 28 minutes.

Pienaar duly converted the penalty and he slotted over another superb conversion when Olding sprinted over after good work from Bowe in the 35th minute.

Ulster were firmly on top and a hurried clearance from Prydie gave Cave the chance to charge into the corner for the third try, which Pienaar converted two minutes before the break.

Ulster pressed for the bonus-point try on the restart and it arrived five minutes into the second half when Marshall scampered over on the blindside and Pienaar made no mistake with the conversion.

Prydie finally put the Dragons on the scoreboard with 10 minutes left, going over from a Jonathan Evans lay-off after a break from Toby Faletau.

Replacement Steffan Jones missed the conversion and the Dragons withstood late pressure as Ulster chalked up a win which puts them on course for home advantage in the play-offs.