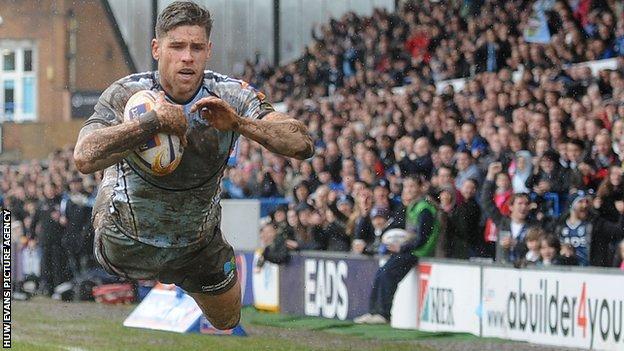 Jamie Roberts bade farewell to Cardiff Arms Park with one of three tries as the Blues saw off winless Zebre in the Pro12.

Rhys Patchell and Gavin Evans went over in the opening period for the hosts with Leigh Halfpenny adding a conversion and three penalties.

But Phil Davies' side found the drab conditions too poor to make for a spectacular send off for Roberts and Sweeney.

However, the victory was memorable for Roberts who helped his side to only their third home won of a season that began with a move back from Cardiff City Stadium.

Zebre, who host Irish provinces Leinster and Munster in the final two rounds, battled throughout.

But they were unable to mount a a serious challenge and substitute Cristiano's consolation try came in the last minute.

Halfpenny levelled in the 11th minute and the hosts went ahead after back-row forward Michael Paterson stole a Zebre line-out throw for Patchell to squeeze over, Halfpenny converting.

Halfpenny made it 13-3 only for Halangahu to cut the deficit to four points with his second successful penalty, again from breakdown offence.

Halfpenny restored a 10-point advantage for the Blues with a trademark long-range penalty strike.

And it got better when Patchell's counter-attack paved the way for skipper Evans to accelerate and out-sprint the cover for a runaway try to make it 21-6 in favour of the Blues.

Zebre right-wing Leonardo Sarto was sin-binned for attempting to trip Patchell while Halangahu was short with a long-range penalty attempt.

A magnificent leap and catch from Roberts when he chased an up-and-under from Halfpenny led to the Blues securing a penalty, opting to go for a try.

It almost paid off, but Roberts was stopped just short while right wing Owen Williams was bundled into touch near a corner flag.

However, Roberts was not to be denied as handed off several defenders to score, Halfpenny adding the conversion.