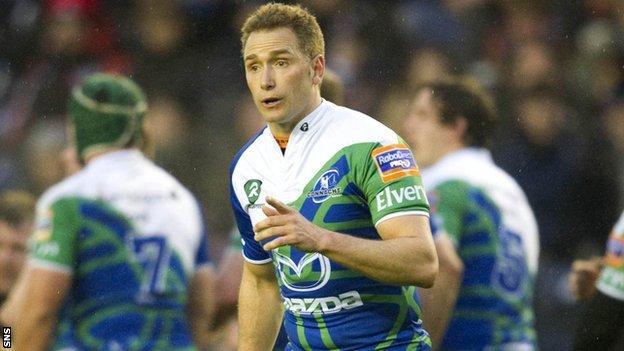 Dan Parks reminded Scotland of his kicking abilities as he led Connacht to a Pro12 win over Edinburgh at Murrayfield.

The former international fly-half kicked four penalties, two conversions and a drop goal as the Irish stayed ahead of their hosts in the table.

Michael Kearney and Robbie Henshaw scored a try apiece to seal a deserved away win.

Edinburgh relied on Greig Laidlaw's boot for all of their points.

But it was a 10-minute flourish that delivered Edinburgh's first defeat under the three-match tenure of interim coaches Stevie Scott and Duncan Hodge in an encounter that featured only rare flashes of flowing rugby.

Parks opened Connacht's account after three minutes with a straight-forward penalty from inside the home 22.

Within two minutes, Laidlaw booted an equalising three-pointer from a similar range.

The home skipper was on target again 10 minutes later after an offence at a scrum 35 metres from the Connacht line.

Edinburgh were looking marginally more threatening than the visitors and Tim Visser's first involvement in proceedings yielded another penalty that Laidlaw again steered between the sticks.

A brief flurry of attacking play by the hosts handed the Edinburgh scrum-half a fourth attempt on goal and he again calmly converted to extend his side's lead to nine points after half an hour.

The hosts had appeared to be gaining the upper hand but the momentum swung in the opposite direction in the 33rd minute when Gavin Duffy broke clear, sprinted down the left flank then offloaded to Kearney, who trotted in for a try.

Parks added the extra two points but instantly offended on the edge of the Connacht 22 to earn a yellow card and Laidlaw landed his fifth kick of the evening.

Connacht trimmed the deficit to two points at the interval when Duffy booted an injury-time penalty.

Laidlaw had missed his first kick of the evening before Parks returned to the fray and his first involvement was to bang over a penalty that nudged the Irish outfit into the lead for the first time since the third minute.

With the clock ticking up to 53 minutes, the former Glasgow Warriors fly-half was on target once more.

Edinburgh responded with a rare sortie into the opposition 22, where an offence by Ronan Loughney resulted in the Connacht prop being shown a yellow card and Laidlaw booting penalty number six.

The hosts' next attack produced a scrum and they shunted the short-handed Connacht pack to earn another penalty that Laidlaw chipped over to leave the home side with a two-point lead entering the final quarter.

Parks restored a single-point advantage with a neatly taken drop goal, only for that to be cancelled out by an eighth Laidlaw penalty.

With nine minutes left to play, Parks suffered his only miss and that failure looked to have cost the visitors the match.

However, with three minutes to play, Edinburgh full-back Tom Brown fumbled and, in the disarray that followed, Henshaw plunged over for the second Connacht try.

Parks added the conversion then deprived Edinburgh of the narrow defeat bonus point when he thumped over a long-range penalty with the final action of the match.

It leaves Edinburgh in 10th place, four points behind Connacht, who leapfrog Cardiff Blues into eighth.

"A lot of individual errors cost us in the end along with some poor discipline.

"They got a bit of confidence when Dan came back on, they started winning collisions and we were always on the back foot.

"A lot of the Italian international players play for Treviso and we need to find some answers come next Friday night."