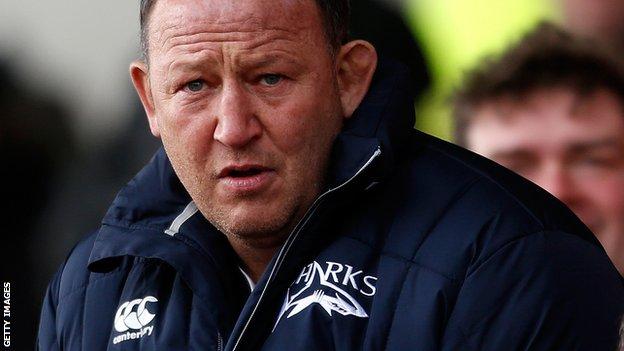 Sale Sharks director of rugby Steve Diamond says the club are close to recruiting a number of players as they start preparing for next season.

is their only confirmed new face for next term.

"We've got three or four imminent signings and we're in the marketplace for two or three internationals who are close to coming to us," said Diamond.

"That's not dependent on whether we stay up or not and never has been. They see Sale as a big club."

Diamond revealed to BBC Radio Manchester earlier this week that although the Super League leaders have yet to confirm that a deal is in place.

But with Powell likely to depart, and with at the end of the season, Diamond has admitted that adding at least one back-row forward to his squad is a priority.

Wing Charlie Amesbury is also leaving the Sharks to

Sale could move within sight of Premiership survival by beating Gloucester on Friday. A win would leave bottom club Welsh needing to win their remaining three fixtures to stand any chance of staying up.

Diamond continued: "Gloucester are a good side at home but their travelling game hasn't been that good.

"I've reminded our players that we haven't lost to Gloucester since 2001 in Manchester and I want to continue that this week.

"The way we upset them is to be ferocious in our defence and abrasive in our forward play. If we can do that, we stand a chance of winning."

Meanwhile, fly-half Nick Macleod believes Sale have grown more confident as the season has progressed, helped by Diamond's return to the role of director of rugby in December.

Bryan Redpath began the campaign in the job before being redeployed as head coach, while John Mitchell also had a short spell in charge.

Diamond recently announced that he

Macleod said: "It's been a tough season and there's no hiding from that, but we really want to end on a positive and give our fans something to cheer about. If we can climb up to 10th, that would certainly be a step forward.

"Stability for a club is obviously huge and it's good to know as a player what's happening above you.

"As the season's gone on, we've got better and better. Since Christmas, we've had a real push and that stability has certainly helped."