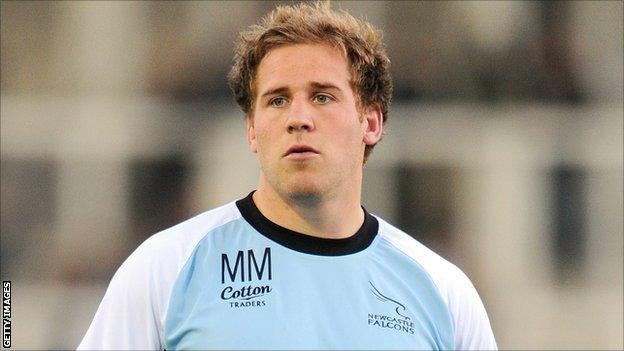 Newcastle Falcons hooker Michael Mayhew will join London Irish on a three-year deal at the end of the 2012-13 season.

and went on to make two Premiership appearances.

"Mike made a big impression when he played for us earlier in the season," Irish coach Brian Smith said.

"He's a big fella and a dynamic ball carrier so he'll fit into our game very well," Smith added.

"I'm delighted he's bought into our vision for the future at our club. Mike is also English qualified and I believe he has the potential to kick on and play Test rugby."

Mayhew, whose brother Richard is a Falcons player, joined Newcastle from North Harbour in September 2011.

"I have really enjoyed my time at Newcastle Falcons, [but] a move to Irish is the better option for me at this stage in my career," Mayhew said.

Tui'fua, 28, joined Newcastle in August 2011, after spells in Super 15 rugby with the Chiefs, in addition to an impressive 2011 World Cup campaign.

"I would like to thank everyone at the club for helping me to settle in to life in the North East when I first moved here," he told the club website.

"I have had a great time up here, and I now want to help the club get back up to the Premiership before I leave in the summer."