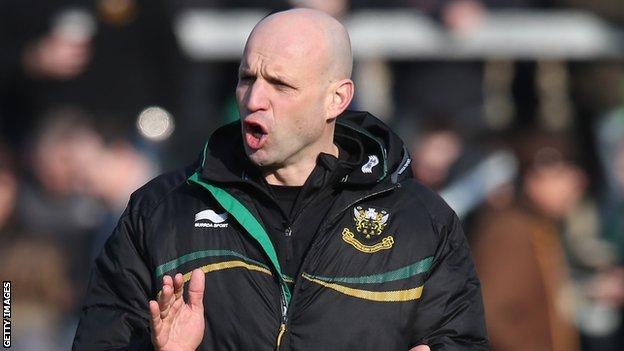 Northampton Saints boss Jim Mallinder has said he is "fed up" with former players criticising the signing of winger George North.

Matt Dawson and Ben Cohen have said a quality fly-half would have benefitted Saints more.

"I get a little bit fed up of some of our ex-players talking about him," Mallinder told BBC Radio Northampton.

"Your ex-players can have their say but generally you want them to be positive and supporting the team."

Wales international North, 20, will where he has scored nine tries in 10 RaboDirect Pro12 matches this season.

Former England backs Dawson and Cohen played over 400 times between them for Saints.

Neither has questioned the quality of North, but Dawson said the signing was

And Cohen echoed that belief by saying Saints really should be focused on bringing in a world class fly-half "like Nick Evans at Harlequins or Owen Farrell at Saracens".

"Then you make your opinion and I think we've got a world class player. The majority of people I have spoken to are really excited, so it's just a shame you hear some people who don't have the same feelings."

Saints have also secured deals for and for the 2013-14 campaign.

"It shows the club's intent of moving forward next season," said Mallinder. "As a club we want to push on and I think some of these signings show our intent.

"George is high profile without a doubt. But he's also a world class player.

"If you listen to people in Wales who see him every week - they're talking about how he can change games.

"I've seen him play a lot. He's only 20 so there are things to improve but he's a match-winner."