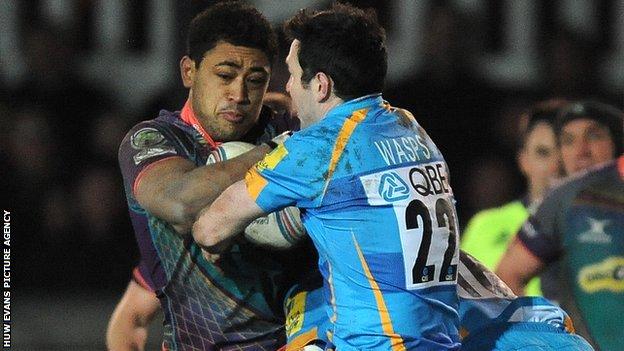 Newport Gwent Dragons will not be tempted to sell star number eight Toby Faletau before his contract expires at the end of the 2013-14 season.

And asked if the Dragons could be tempted to release Faletau early - as the Scarlets did with George North - Edwards was equally unequivocal.

"Not tempted at all," replied Edwards. "I prefer to work with what I've got."

Wales wing North has joined Jamie Roberts and Dan Lydiate in leaving for clubs outside Wales at the end of the season.

North will be at Northampton while Roberts and Faletau's fellow Dragon Lydiate are expected to join French side Racing Metro.

While Cardiff Blue Roberts and Lydiate are moving on at the end of their contracts, North is leaving a year early.

Regional bosses and the Welsh Rugby Union are at loggerheads over how to stem the flow of players to English and French clubs.

The four Welsh regions have urged the WRU to start working towards a financial strategy that will ensure the game will "survive and prosper".

Relations between the two sides have soured over recent weeks, sparked by the WRU's accusation that Scarlets offered to sell North to French clubs without his knowledge.

Scarlets denied the accusation and the four Welsh regions then jointly rejected an invitation from the WRU to discuss the option of centrally contracting the best Wales players.

Edwards hopes a solution can be found that allows players such as Faletau, who has won two Six Nations titles with Wales, to remain in Wales.

"I think the important factor is [that] we see Toby playing out here [Rodney Parade]," said Edwards.

"He's a home-grown player and a great young Welsh player.

"It's important we do our best to keep him in Wales and not give up and cash in on him."