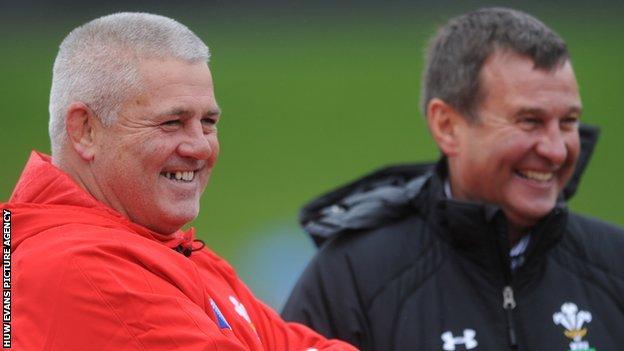 The claim was made in a letter sent to WRU member clubs following the recent rows between the WRU and the Ospreys, Blues, Dragons and Scarlets.

"It seemed as if they [the regions] wanted to gain considerable control of Welsh rugby," read the letter.

The regions, represented by Regional Rugby Wales, denied the claims.

"We would like to make very clear that the Regions are not interested in "control" of the national game as they unanimously outlined in correspondence to the WRU in a letter to the Chief Executive on 7 February 2013," Regional Rugby Wales said in statement.

They also repeated their call for an independent arbitrator to be appointed to resolve the dispute while the Welsh Rugby Union have declined to discuss the letter's content.

Warren Gatland is expected to return from 2013 British and Irish Lions duty in Australia to guide Wales into the 2015 World Cup, and his contract ends after that.

In the latest twist in their continuing row, the letter to member clubs from the WRU, claims the reason negotiations over the participation agreement with regions had foundered was because "it seemed as if they [the regions] wanted to gain considerable control of Welsh rugby".

The letter continues: "For instance they wanted to be involved in the appointment of the Head Coach of Wales, the WRU Head of Rugby and the WRU Group Chief Executive."

The four Welsh regions recently declined a WRU invitation to attend a meeting to discuss the central contracting of players.

In response to the WRU's letter, Regional Rugby Wales, on behalf of the four regions, issued a statement.

"We repeat our call for independent arbitration to find a clear path through the current debates and to scrutinise documentation, process and communication regarding the setting up of the PRGB and the terms of reference of the signed memorandum of understanding," the statement said.

"We seek independent arbitration because it is clearly a much more appropriate way to conduct discussions - keeping any debate away from the public arena and through a rightful independent process.

"We maintain our view that the PRGB is the most effective vehicle to undertake the discussion and debate to identify the right solutions for Welsh professional rugby and that it is not constructive to conduct that debate in the public domain."

Regional Rugby Wales said it would only discuss the future of the game through the Professional Regional Game Board.

The PRGB, comprising the four regions, the WRU and an independent chairman, was set up following a professional review of the game in Wales by accountants PriceWaterhouseCoopers that questioned the

It has met only once since being formed, in December 2012, with presiding judge Sir Wyn Williams appointed as chairman of the PRGB.

Amid what is says is an attempt to help member clubs "understand the true position", the WRU letter seeks to focus on "fundamental issues which have been misreported and misinterpreted in the press".

The letter says a perception that the WRU has sought to stifle plans to set up a PRGB is incorrect.

It adds: "The WRU cannot an will not agree with the establishment of any body which seeks to control Welsh rugby and effectively removes the ultimate control from the full board of the WRU as the governing body."

The row between the four regions was triggered by the Wales wing George North's move from Scarlets to Northampton.

In the letter to the clubs, the WRU says it has re-issued an invitation to a meeting with the regions and awaits a response

The letter also says Cardiff Blues were the only Welsh team North would have joined on leaving the Scarlets and that "the WRU did try to keep him in Wales".

However, it is claimed, the bid to prevent North moving outside Wales failed because the regions "had signed an agreement which prevented any of them from signing a player who was contracted to the WRU".