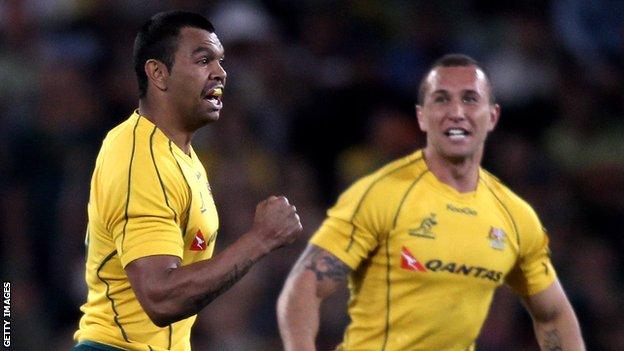 Australia coach Robbie Deans has insisted Kurtley Beale and Quade Cooper could face the British and Irish Lions despite missing out on a training camp.

The two fly-halves were not named in a 30-man squad that will be put through its paces from Sunday, two months before the opening Test.

Beale, 24, is on an indefinite break from the sport, while Deans questioned the form of 25-year-old Cooper.

"We've talked and he understands what's required at this level," he said.

Cooper and Deans have endured a tense relationship, with the Queensland Reds playmaker being fined $60,000 (£41,000) with a suspended three-game ban last October.

Cooper was charged with bringing the sport into disrepute for criticising the supposed defensive style favoured by Deans and labelling the environment within the Wallabies squad as "toxic".

Meanwhile Beale is absent as he receives treatment to solve an alcohol-related personal problem after a dispute with two of his Melbourne Rebels team-mates following a club game in South Africa last month.

"Kurtley's obviously not playing at the moment, he's sought help which is great and he's going through a counselling process," Deans said.

"There's still a lot of rugby to be played and a lot of opportunity for everyone to press their claims."

His admission means the pair are absent from what has been described as a "logistics camp" in Sydney, where the players will be told about the off-field requirements and team planning ahead of the Lions Tests in June and July.

The Australians will pick a squad of 25 players on 18 May, a further six players will be called up as soon as the Super Rugby competition breaks at the start of June, with the final 31-man squad to face the Lions unveiled on 11 June. Their opponents will reveal their selection on 30 April.

Warren Gatland's side will play three Tests against the Wallabies, beginning in Brisbane's Suncorp Stadium on 22 June, before playing at Melbourne's Etihad Stadium on 29 June and Sydney's ANZ Stadium on 6 July.