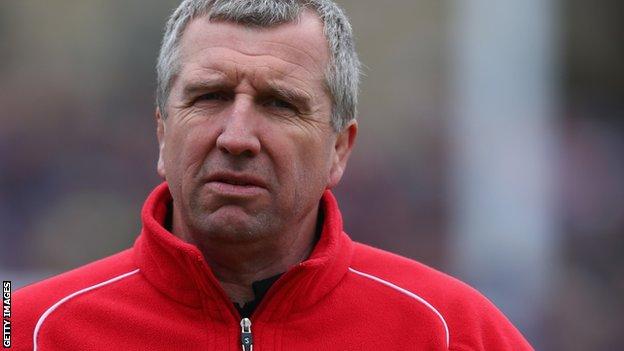 London Welsh head coach Lyn Jones says his team will fight until the end as they look to avoid relegation from the Aviva Premiership.

It's like a member of your family passing away really. It takes a lot of time to recover from the kick in the stomach

The penalty leaves them bottom of the table, eight points adrift of 11th-placed Sale with three games to play.

"We're still there and still fighting and we intend to come out and play a bit of rugby," Jones told BBC Oxford.

The club host Northampton this weekend and Jones admits the penalty from the Rugby Football Union has had a deep effect on everyone at the club.

"With the five point deduction it has been difficult for us," he said. "It has taken away a lot of the energy at the club and people working at the club.

"It's like a member of your family passing away really. It takes a lot of time to recover from the kick in the stomach.

"All the hard work everyone at the club has put in has been for nothing and that is a difficult one to take.

"But we are forgiving people and we need to move on and get over it as quickly as we can."