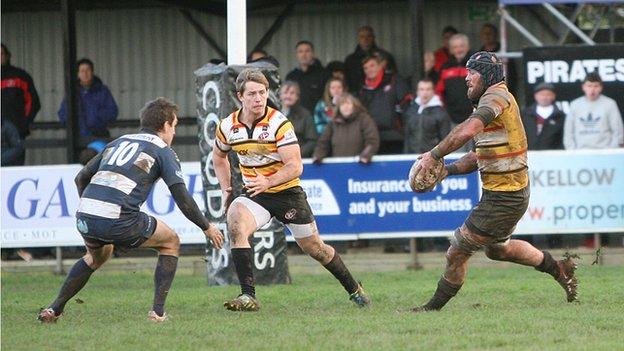 Cornish Pirates head coach Ian Davies has admitted his side's season ended after their British and Irish cup defeat by Munster on Sunday.

Pirates went down by a solitary point last weekend before losing to 41-28 to Rotherham in league action in midweek.

"In reality the season ended last Sunday with the Munster defeat as the top four was out of our grasp," Davies told BBC Radio Cornwall.

"It's been a bit of a rollercoaster ride this year."

Sixth-placed Pirates go to the play-off bound Nottingham on Sunday, a game that will be screened live on television.

"We're excited to be on television, it gives you that extra buzz," Davies added.

"Nottingham is a good playing surface and with some of our players leaving they will want to do well."

With the Pirates not competing in any end-of-season competitions this term, Davies is happy to have a rest.

"It's been a bit of a grind for three years with the various finals we've been in so it's going to be nice to have a bit of a break," he admitted.

"It's the start of a new exciting time for the Pirates with Josh (Lewsey) here and he has already brought some great ideas.

"We've got some new signings to look forward to and new innovation off the field too."

Pirates will be boosted for the trip to Nottingham by the return of hooker Rob Elloway, forward Laurie McGlone and scrum-half Gavin Cattle.