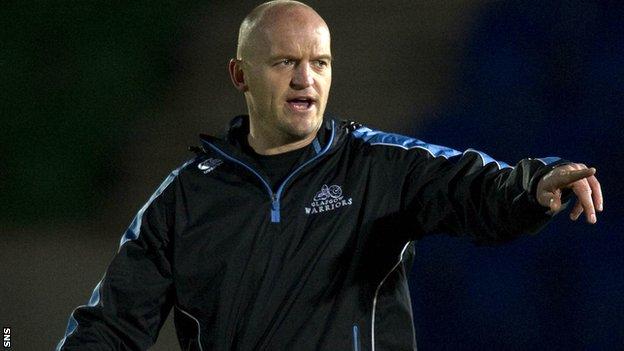 Head coach Gregor Townsend labelled Glasgow Warriors' performance in the 29-6 defeat by Scarlets as one he never wants to see again.

Warriors were knocked off top spot in the Pro12 table by Ulster, who comfortably beat Newport Gwent Dragons.

Townsend told BBC Radio Scotland: "It was very disappointing, the only time this year that it's happened.

"I'll be very determined, and I know the players will be, to make sure it never happens again."

A win in Llanelli would have secured Glasgow a play-off spot with two league games remaining.

However, two early penalties had Simon Easterby's men ahead and Warriors rarely had a look in thereafter.

"I think first gear's a compliment, we were stuck in neutral," Townsend said.

"We were beaten by the better team tonight, there's no doubt about that - the team that showed more desire, commitment, went forward and got stuck in.

"These are characteristics that we've shown in abundance, but not tonight.

"We'll try and find the answers to what the problems were. We'll look at how we prepared, we'll look at selection and how we can snap out of it as well."

After Ken Owen's first-half try for the home side, Glasgow fly-half Ruaridh Jackson was successful with two penalty kicks to make it 16-6 at the break.

However, Warriors had little else to offer and Scarlets' full-back Liam Williams crossed the line to put put them well on their way to victory.

The Welsh side have won five of their last six Pro12 contests.

"If we play anywhere near like we did tonight, we'll lose that game," added Townsend.

"It was always going to be a very big game, playing a team that's fighting for a top-four place, like us.

"Every team we're playing now has been on a great run of form. We know that they'll be very physical, like Scarlets were tonight."