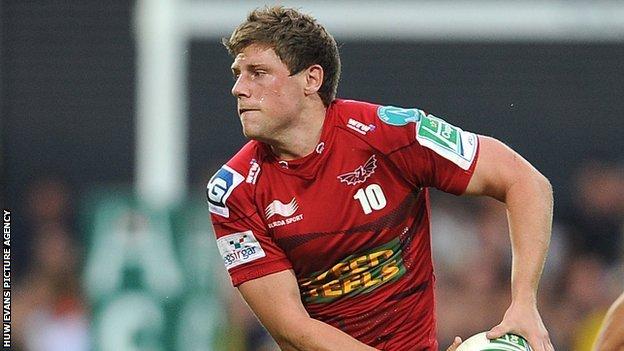 Rhys Priestland could return from his Achilles injury for the Scarlets against Cardiff Blues next Saturday.

Wales fly-half Priestland suffered the blow in December against Exeter and was initially thought likely to be out for the season.

But in February Priestland said was hoping to return in April.

And Scarlets coach Simon Easterby said: "He'll definitely be in contention [to face the Blues] if he can come through the week."

A successful return at this stage could make Priestland a contender for the British and Irish Lions tour but if he does not make the trip to Australia, a place on Wales' June tour to Japan would be a possibility.

Easterby will wait before Priestland's reaction to a return to full training before deciding whether or not to field Wales' 2011 World Cup and 2012 Grand Slam pivot.

Priestland's form dipped on Wales' summer 2012 tour to Australia and in their 2012 Autumn Tests, and the 26-year-old, amid criticism of his displays.

But Scarlets chief Easterby is looking forward to having Priestland, who has won 22 Wales caps, back in action.

"He's trying to build up strength in his calves and he hasn't got the biggest calves anyway so hopefully he'll get a good week's training," said Easterby.

Meanwhile, youngster Owen Williams has proved his ability with an impressive run in the Scarlets' number 10 shirt, although it comes just before where he will also have to fight for game time.

But the Scarlets will have as back-up to Priestland as well as Aled Thomas, Jordan Williams and Dan Newton, and Easterby refused to be drawn on the significance of Williams's departure.