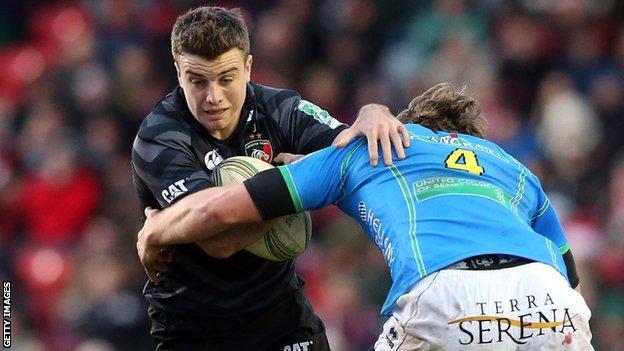 Head coach Gary Gold had initially played down his interest in the 20-year-old, whose father Mike is assistant coach at the Rec

But Tigers boss Richard Cockerill revealed in January that he was expecting Ford to join their Premiership rivals.

Wales international Roberts, 26, has amassed 54 appearances for Saints, while fellow scrum-half Young, 24, has spent the last two seasons with Leicester.

The new arrivals will compete for the number nine shirt with Peter Stringer, who recently agreed a permanent move from Munster.

"Micky and Martin are both very strong, capable players with good core skills and the ability to do things the opposition don't expect," said Gold.

"They are still young, and we are looking forward to having them join the squad here and seeing them develop further.

"George is an exceptionally talented young player. He has already shown a tremendous range of skills, and we know he will only grow as a player and further develop those skills."

Ford has been with the Tigers since the age of 15 and made his first-team debut in November 2009 - becoming the youngest player to make his professional debut at club level.

He has since made 33 first-team appearances for Leicester, scoring 220 points, but remains second-choice fly-half behind England's Toby Flood, who is contracted until 2014.

Ford added: "It's a club building for the long-term, focusing on developing young players like myself and I can't wait to be part of that environment."