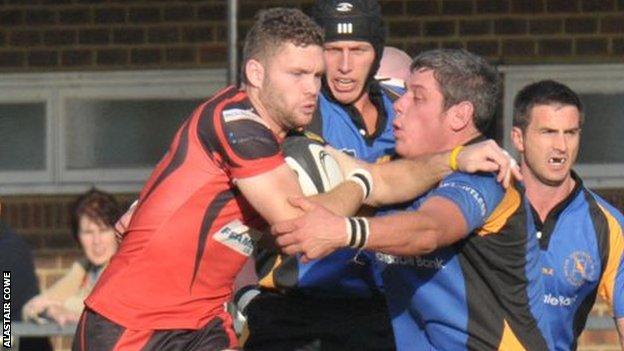 Redruth scored six tries as they ended their five-game losing streak with a 38-22 win over Southend.

Tom Notman and Chris Fuca both scored two tries as the Reds got their first win since the beginning of March.

"The boys were ashamed of how we've been playing, we trained as hard as normal but nothing was clicking," Notman told BBC Radio Cornwall.

"We took a hammering last week and we stuck at it this week and ground out the win in some horrible weather."

Fuca scored two tries in the opening 11 minutes to set Redruth on their way.

The boys showed awesome skill level, our pack destroyed theirs and our backs

Alan Barker pulled one back for the Essex club midway through the first half before the Reds converted a 39th minute penalty try to lead 19-5 at the break.

Notman scored his first just after the restart and Neil Turner added another soon after in-between a Todd Bailey try for the visitors.

Daniel Legge got another back for Southend on 57 minutes before Notman got his second with 20 minutes to go while Chris Green got a late consolation for Southend.

"The boys showed awesome skill level, our pack destroyed theirs and our backs, Lewis Vinnicombe and Craig Bonds, had awesome games, breaking lines and putting things away," Notman said.