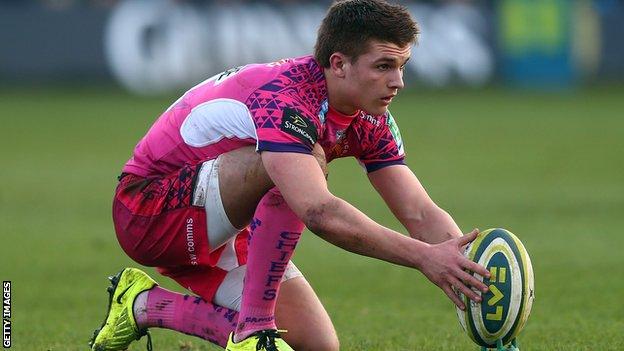 "His involvement will only grow, it won't lessen now," Baxter said.

"He's featuring in our Premiership 23 on a regular basis and it was fantastic for him to have some game time," he added to BBC Radio Devon.

Slade, this season, has also been a regular in the England Under 20's side.

"Henry's had to be patient, he's had to work extremely hard to break into being a starting LV= Cup player for us.

"He's also worked extremely hard to do as well as he's done with the England Under 20's.

"We like working with him, he's a good character and that's the important thing as good characters are nice to work with and you want them to be successful."

Slade signed a new deal to stay at Sandy park until the summer of 2015 in December,

With Slade will battle it out with first choice fly-half Gareth Steenson and for the number 10 shirt next season.

But Baxter says Steenson will be a tough act to unseat as the club's starting fly-half.

"People need to remember that Gareth Steenson is a good Premiership fly-half that's getting better.

"I think at times he's been questioned defensively, but he put in some great stop-tackles in for us and by and large he controlled territory for us very well and knocked all his penalties over bar one at the start of the game.

"We've got some quality options there now and I hope they keep driving each other on to greater heights."