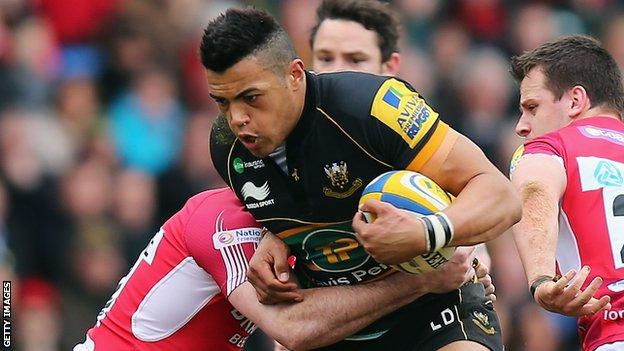 Northampton's Luther Burrell wants to end a "frustrating" season in the positive manner in which he started it.

Scoring twice in the 31-14 win at London Welsh, the 25-year-old took his tally to seven in 16 appearances after making the move from Sale Sharks.

Burrell told BBC Radio Northampton: "It's been very frustrating but you've got to stay positive. We've all got one goal - to win the league.

"It's about me finishing the season the way it started."

The centre scored three tries in September matches against Exeter Chiefs and Worcester Warriors but has spent long spells in 2012/13 on the sidelines.

"I spoke to Jim Mallinder and the coaches this week and it was massive for me to come in and fill that slot [whilst Dom Waldouck is injured]," added Burrell.

"I'm happy to be in there. It's tough with competition for places - Tom May's showed what he can do."

Saints lie fourth in the Aviva Premiership with two matches to play, against Burrell's former side and champions Harlequins.

"It's always better to be underdogs because you don't want there to be unnecessary pressure," he said.

"We'll be ready for the challenge."