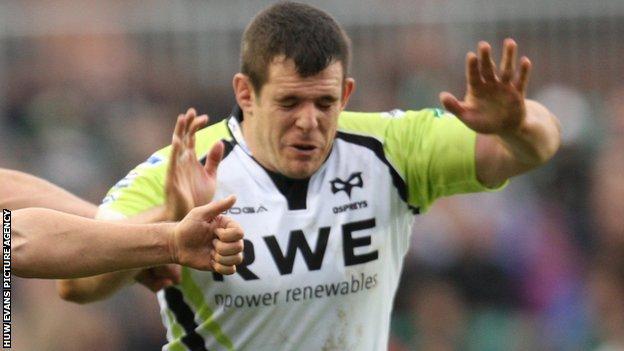 Wales prop Aaron Jarvis has signed a new three-year deal to stay at Ospreys until 2016.

The 26-year-old tight-head is the 11th player to commit to the Welsh region in recent weeks.

Jarvis is currently sidelined with a knee injury but hopes to return to start the 2013-14 season.

"This is what I really wanted," said Jarvis immediately after signing his new deal.

"I'm happy living in the area, the family have settled down here, and I've really developed as a player over the last two seasons since coming here.

"I'm really, really happy to have signed for another three years."

Jarvis made his debut for Ospreys against Edinburgh at the start of the 2011 season following his move from Bath.

He deputised for then-injured fellow Osprey Adam Jones during Wales' 2012 autumn series, but suffered a serious knee ligament injury early on in the 33-10 defeat by New Zealand.

That ended Jarvis' season, leaving him on three Wales caps, and he is now targeting a return to full training in the off-season.