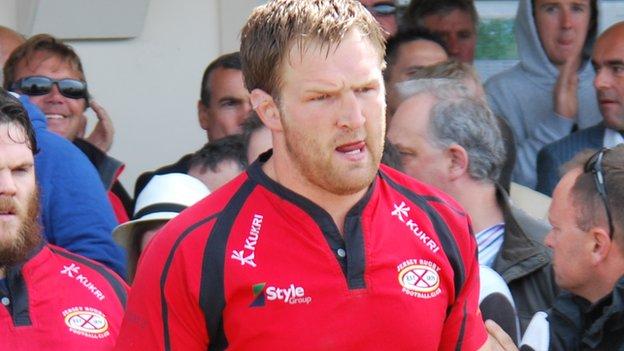 The 28-year-old helped Jersey to in his three seasons at the club.

The Yorkshire-born second row has signed a two-year deal with Leeds.

"Nathan has had an opportunity to continue his career with a different Championship club, and he goes with our best wishes," said Jersey director of rugby Ben Harvey.

"He made a significant contribution to our promotion-winning seasons in National Two South and National One and, should all go to plan this week, we'll be looking forward to catching up with him again next season," Harvey added.

Hannay said he was looking forward to the chance to move back to Yorkshire and play alongside former Jersey teammate David Doherty.

"I was born in Halifax but moved away when I was three to the south west but you could say I am a Yorkshireman at heart.

"David Doherty is a good friend of mine and he sold Leeds to me. I am very excited and looking forward to the new challenge.

"I need the challenge at this stage of my career. Jersey's aim is to survive in the Championship whilst Leeds' ambition is to get into the Premiership and being in that environment can only make me a better player," he added.

Leeds have also announced that 21-year-old fly-half Glyn Hughes will join them from Moseley.