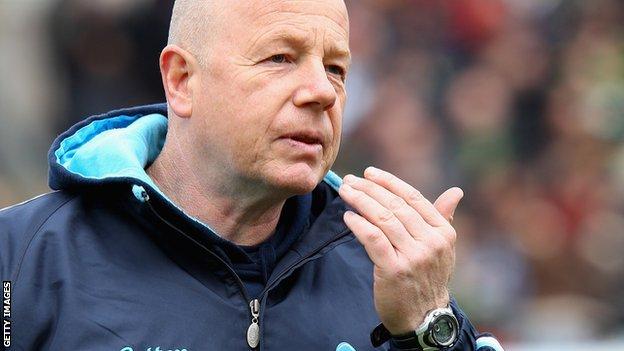 The former England scrum-half Hill, 51, who took over at Sixways in May 2010, earned promotion from the Championship in his first season in charge.

But Worcester, ninth in the Premiership with just two matches left, have failed to qualify for the Heineken Cup for the second successive year.

"News of Hill's exit will have come as something of a shock to players, supporters and, you suspect, Hill himself. Speaking after Sunday's defeat at Saracens, he gave no indication he might be on his way, but was focusing solely on this weekend's home game with Harlequins.

"Hill did well to get Warriors back into the Premiership at the first attempt but, while they are playing a more attacking brand of rugby, in a results-driven industry, he has clearly paid the price for too many near misses - games they should have won, but didn't."

And the ambitious Warriors board say Hill's sacking was prompted "following the club's recent run of form".

Their overall form in the second half of this season has been poor since their Challenge Cup exit in January, with just one win in nine league games, culminating in Sunday's 47-17 defeat at Saracens.

"Richard was brought to Worcester to get us promoted back to the Premiership, which he successfully achieved," said Warriors rugby committee chairman Bill Bolsover.

"We then wanted to consolidate our position amongst the elite before breaking out of the bottom four.

"But, despite all his hard work, effort, attention to detail and honesty, we have not continued the forward momentum."

Rugby operations director Corin Palmer will take charge of senior team matters for the last two league games of the season against Harlequins this Saturday and at already relegated London Welsh on 4 May.

Hill was allowed to rebuild his backroom team last summer, with the appointment of forwards coaches Nigel Redman and Phil Vickery and attack consultant Mathieu Rourre.

But despite guaranteeing top-flight rugby next season, they have once again missed out on the end-of-season play-offs and a place in the Heineken Cup, largely because of their poor form away from Sixways.

Worcester's coaches in the Premiership era

The Warriors have won five of their 10 home league games but have lost all 10 on the road. In fact, they have not won away from home in the Premiership in 15 matches since January 2012.

Hill, originally appointed on a two-year deal, had a year left on his contract, having signed a two-year extension in 2011 when the Warriors won promotion back to the Premiership.

He arrived at Sixways from French side Chalon-sur-Saone, having previously spent six years in charge of Bristol before leaving in February 2009.

He beat off some stiff competition to get the Worcester job, former Gloucester coach Dean Ryan, England forwards coach Graham Rowntree and World Cup winning former South Africa boss Jake White having all been linked with the vacancy.

Ex-Saracens, Wasps, Newcastle, Bristol and England forward Ryan, 46, part of Scotland's coaching team under Scott Johnson during this year's Six Nations, has already been tipped as a contender to take over at Sixways.