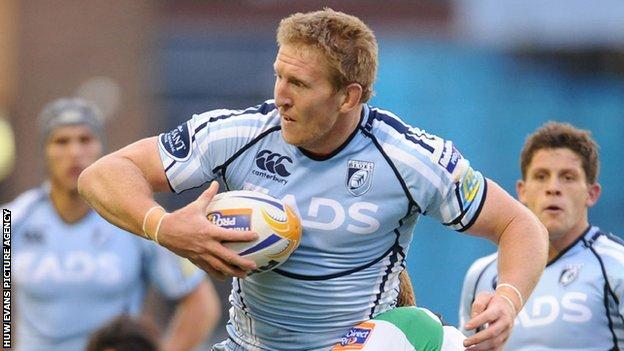 Bradley Davies is expected to return for the Cardiff Blues at the Scarlets on Saturday evening.

The 26-year-old Welsh international second row has not played since injuring ankle ligaments during a Blues training session in January.

Davies says he is hoping to impress the national selectors ahead of Wales' summer tour.

His return against the Scarlets gives Davies the chance to play in two competitive games to prove his fitness for Wales' tour of Japan in June, 2013.

The Blues' final game of the season is in Ulster on Friday, 3 May.

Davies won the latest of his 38 caps against the All Blacks in November 2012, when he was carried off in the first minute after being knocked unconscious in an incident involving New Zealand hooker Andrew Hore.

He picked up his ankle injury before he could return for the Blues and was ruled out of the 2013 Six Nations tournament.

During his time away from the game Davies' wife gave birth to a daughter and the player says the rest has worked in his favour.

"It's given me a bit of time to spend with my family and recharge my batteries, but I'm raring to go now," he said.

"I'm as fit as I've ever been and looking forward to getting back playing."

The Blues face a tough test at Parc Y Scarlets, with the home team locked in a battle with the Ospreys for a place in the end of season play offs.

And the Scarlets impressed Davies during their 29-6 defeat of Glasgow on Friday.

"They battered Glasgow - they were on fire, fair play to them - it's going to be a tough challenge but it'll bring the best out of us," he said.