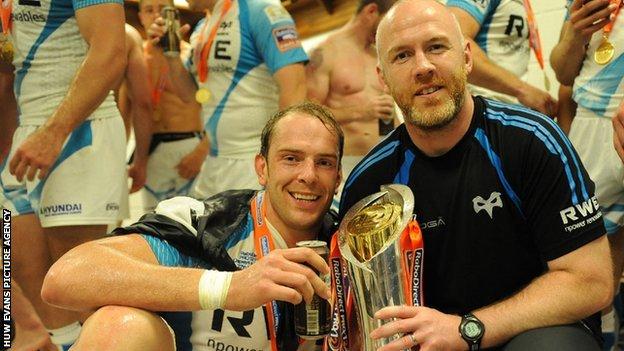 Ospreys coach Steve Tandy says it will be an achievement to reach the play-offs for the Pro 12 Championship.

The defending champions currently hold the last play-off place, but face two tough away matches at Glasgow on Friday and Leinster on 3 May.

"We don't want to stumble over the line relying on others to slip up," he said.

"If we are going into the play-offs we want to do it on merit while building some real momentum for the knock-out games."

Ospreys won the title last season by beating Leinster 31-30 in a thrilling final in Dublin.

They have recovered from a poor start to the defence of their title when they lost the opening three matches of the season.

But in order to reach the play offs they are likely to have to repeat their win in Leinster as well as beating third-placed Glasgow on Friday.

"There are great sides in the mix for the play-offs including last season's two European finalists and a Glasgow team that is really building something," said Tandy.

"While you've got a team like Munster who won't feature in this year's play-offs yet only a couple of weeks ago went to the Aviva Premiership champions [Harlequins] and rolled them over in the Heineken Cup.

"To make the Pro12 play-offs will be an achievement for anyone, particularly when having to overcome the disadvantage of starting with three straight defeats which left us playing catch-up ever since.

"The boys have responded fantastically though and the form in the 17 games since means we are going into these last two matches with a very real chance of progressing."

If they are to make the play-offs the Ospreys will have to overcome their recent poor form north of the border.

The Welshmen have won only one of their last six visits to Scotland, 15-14 over Edinburgh at Murrayfield in February 2012.

Glasgow Warriors have won the last three encounters with Ospreys including the 28-10 victory at Liberty Stadium in round three.