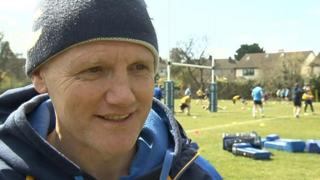 Leinster coach Joe Schmidt says he is surprised that Munster forward Paul O'Connell was not cited over an incident involving Dave Kearney in a bruising Pro12 match.

Kearney was struck in the head by O'Connell when the Munster captain made a clumsy attempt to fly-hack the ball.

Citing commissioner Eddie Walsh ruled there had been no intent on the Ireland lock's part.