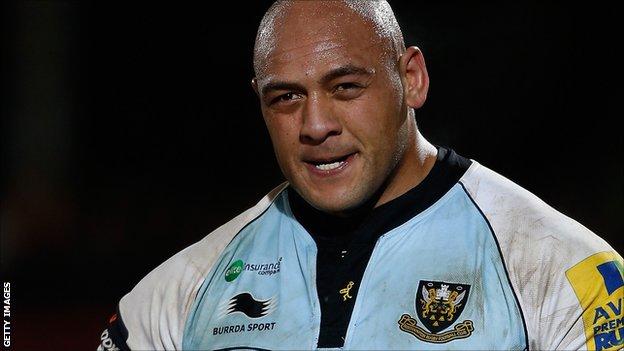 Northampton coasted to a bonus-point victory against Sale Sharks and in turn guaranteed themselves a Premiership play-off place.

Jim Mallinder's side were 25-0 up at the break, with tries from Tom Wood, Lee Dickson and Luther Burrell adding to 10 points from Stephen Myler's boot.

Jamie Elliott and Ryan Wilson both got a brace to complete the try rout in the second half.

Having secured safety with an impressive 32-9 win over Gloucester last week, Sale were unable to match those heights on an emotional afternoon for the hosts.

Brian Mujati and Soane Tonga'uiha were among a host of players making their last appearances on home turf, and the team were keen to sign off at home with an imposing display.

Saints have built their top four push on the dominance of their forwards, but spent the first minutes of the game repelling five minutes of Sale phases.

However once they broke the visitors' foothold, Northampton's power up front told and their opponents folded.

Myler kicked a brace of penalties to set the scoreboard turning, and the stand-off was hugely influential with the ball in hand too as he guided Saints across the park.

With that platform of points, Northampton began to express themselves. Ken Pisi's chip and chase was good enough to turn Sale over inside their 22 and once the ball popped up to Wood he streaked in for a first try.

Gerrit-Jan van Velze dropped the ball when close in but Saints did not have to wait long for another opportunity, as scrum-half Dickson's quick tap and go saw him dart over.

The home crowd at Franklin's Gardens were enjoying a one-sided final regular season home game, and enjoyed a third try before the break when Burrell profited on Tom May's kick and chase to touch down.

Sale began the second period with a spell of pressure in the Saints half but after Kearnan Myall broke the line his inside ball was fumbled by Mike Haley to turn over.

Normal service appeared to have resumed when Northampton won a penalty at the scrum, and Sale were spared a further addition to their deficit when a score by Samu Manoa was ruled out for obstruction.

Tonga'uiha was withdrawn to a glowing reception from the home crowd, and Saints eventually got the bonus point they desired when Elliott got on the end of a slippery move to the left to race in.

He scored a second soon after, when Ryan Lamb came on for Myler and the playmaker's vision picked him out on the far side for a well worked crossfield kick try.

Mujati was applauded off to join Tonga'uiha on the bench and Wilson was in on the left from Lamb's ball to take Saints' points tally to 40.

Manoa was brought from the field with nine minutes remaining as a precautionary measure, as Saints exerted their dominance with 14 men.

They were then reduced to 13 when Courtney Lawes and Sale's Tom Holmes were sin-binned for scuffling after Wood was involved in an off-the-ball incident.

Wilson got a second before Sale ensured they would not be 'nilled' through Gaskell's late score.

"We've had a bit of an up and down season but we're there. Sale made a few changes but we still had to win the game.

"The first five minutes set the tone. We defended and kept them out, and as soon as we'd done that, we knew we were in for a good afternoon.

"The outgoing players have been brilliant for Northampton Saints. It was great we could reward them with that send-off.

"The season's not over, we've got a long way to go, but if we can beat Quins, we get some real momentum for the semi-final."

"We have had a hard season. Since Christmas, we have had to psychologically get them up for every game and we have won seven of the 10.

"Today was just one push too far, we just couldn't keep up with them. Our young front row got taught a lesson, which is good for them, they will certainly be better for it."