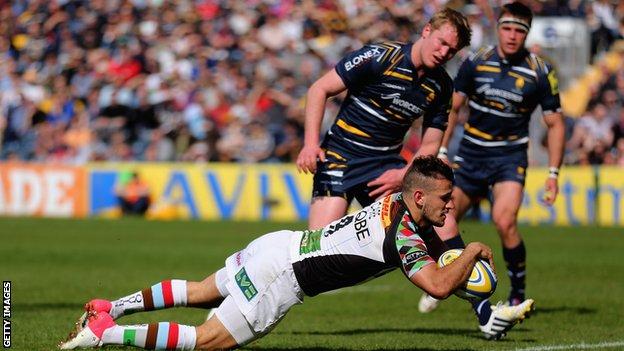 Warriors went in front through Chris Pennell before the sides traded penalties and Danny Care, Nick Evans, and Tom Williams crossed for Quins.

Alex Grove scored for Worcester a minute after the restart and Andy Goode converted before the visitors took command, Care and Evans scoring again.

Quins' Mike Brown scored from a Maurie Fa'asavalu break to seal the victory.

An entertaining first half saw Warriors take an early lead through Pennell who on his 100th appearance for the club was played in by Josh Drauniniu after the winger made an 80-yard break.

But the Premiership champions quickly hit back after fly-half Evans slotted a penalty from close range and then slid over after flanker Fa'asavalu punched holes in the Warriors defence to create the space.

Goode replied with a couple of penalties to take the hosts back into the lead at 13-10.

Harlequins then grabbed two tries before the break with Care at the heart of both.

First he pulled several defenders towards him at the base of the scrum and spotted a pass to winger Williams who went over in the corner.

The England scrum-half then orchestrated a wonderful driving maul and scored himself after going past Goode one-on-one.

Evans missed both conversions but his opposite number made no mistake on the stroke of half-time, kicking a penalty to bring the home side within a try as 20-16.

Worcester caught their opponents cold with a try just after the restart, Grove the beneficiary of a wonderful Pennell break in which he carried the ball 60 metres, beating four players and unselfishly gifting his supporting centre a try.

Goode followed with a conversion and a penalty before Care grabbed his second, going over in the corner.

Quins flanker Fa'asavalu had caused havoc yet again, running through tackles to play the scrum-half in, despite the best efforts of Warriors winger Ben Howard to drag him into touch.

Evans missed a difficult kick but slotted a penalty five minutes later to put the visitors ahead 28-26.

The number 10 then scored an opportunist try after Worcester replacement Joe Carlisle kicked the ball straight into Evans' face. He managed to gather the ball to score under the posts and then add the extras.