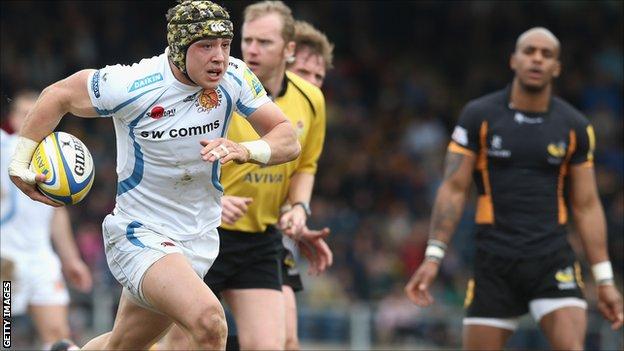 Exeter Chiefs boosted their hopes of a Heineken Cup spot as they condemned London Wasps to a seventh consecutive defeat in all competitions.

Chiefs slipped out of the top six after Bath's win at Leicester, but victory at Adams Park lifts Rob Baxter's side ahead going into the final weekend.

Tom Varndell capped a 100th outing for Wasps with one of their three tries.

Fellow winger Christian Wade and Hugo Southwell also crossed for the home side.

Gareth Steenson's kicking proved vital for Exeter, with four conversions and three penalties to add to their tally, while conversions from Stephen Jones [two] and Tommy Bell plus a Elliott Daly penalty completed the hosts' scoring.

Another win at home to Gloucester in their final league match on 4 May, when Bath visit leaders Saracens, will ensure the Chiefs a place in the premier European competition.

Jones missed a simple kick wide after Exeter were penalised for not releasing, but found the mark shortly afterwards when Daly landed a kick from just inside the visitors' half.

Steenson kicked Exeter level after referee Wayne Barnes ruled out Richard Baxter's score but brought play back for an infringement, and Yeandle finished off a fluid move built on Welch's break soon after for the first try.

James Scaysbrook's inside ball supplied Nowell a clear run for the Devonians' second, and after Steenson landed a penalty, Wade showed his pace to drag Wasps back into the game with his 11th Premiership score.

Welch continued Exeter's dominance when he charged through the middle to score early in the second period, but with Scaysbrook sin-binned, Wasps responded when Southwell was put over by Daly in the corner.

Thomas jinked his way over from close in to seal the bonus point, and Steenson again found the mark with the conversion and a late penalty before Varndell received the reception he deserved to mark a century of Wasps appearances with a consolation score.

"Physically it was a pretty tough game because we had such endeaour to carry the ball so much and play so much rugby. Attacking-wise, we got a lot right today. Whether they ran into a brick wall or found space, they got up again and carried again and that was the key to the game.

"Ultimately, that created enough momentum and enough space for us to find some holes, which we did very well.

"We showed an enthusiasm and an endeavour when we were points up, which we have sometimes lacked, and we kept at them.

"It [qualifying for the Heineken Cup] is important to the players but it's not the be all and end all for Exeter rugby club.

"It's great for us - we get a couple of big gates, and the performance you saw there was from a group of players who want to be in the Heineken Cup and achieve."

"If I was totally honest, it would have been great to be in the top six but I would be concerned because I don't think we're ready for Heineken Cup rugby.

"The last home game last season, we were playing Newcastle to stay in this league and we have made strides this season but there's still work to be done.

"Come February, we had put ourselves in a pretty good position and I was accused of dampening expectations - but I was being realistic.

"Credit to Exeter, they are a good side but they didn't bring anything we didn't expect. I felt today that a lot of senior players fell off a lot of tackles which you would expect them to make."