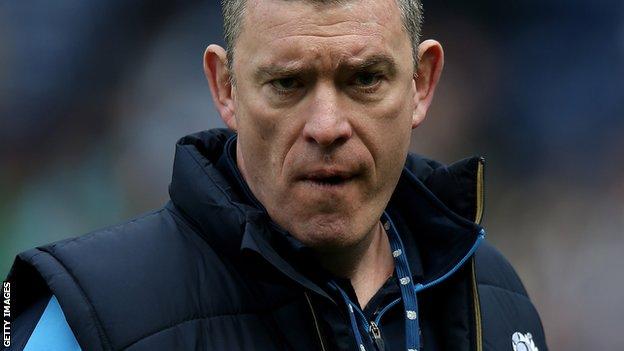 The 46-year-old former Gloucester and Bristol coach was part of Scotland's forwards coaching set-up under Scott Johnson during this year's Six Nations.

He will take over at Sixways after this season's final Premiership game against London Welsh on 4 May.

"Despite his Gloucester connections, Dean Ryan has been widely welcomed by the Worcester fans I've spoken to. Many are grateful to Richard Hill for guiding the Warriors back to the Premiership, but felt it was time for a change.

"Known to be a strict taskmaster with a superb rugby brain, Ryan is now charged with turning Worcester from perennial Premiership strugglers to genuine top-six contenders battling the likes of Exeter and Bath for a Heineken Cup spot - something demanded by the Sixways board and a reason why they parted company with Hill.

"Securing a seat at Europe's top table should also stop the exodus of young talent leaving the club such as promising openside flanker Matt Kvesic who has opted to make the short trip down the M5 to Kingsholm. That should give the club that forward momentum it craves. And all eyes will now be on what players he brings in and how they blend with the summer signings Hill had already made before departing."

Former England scrum-half Hill, 51, took over at Worcester in May 2010, guiding the Warriors to promotion back to the Premiership at the end of his first season in charge.

Worcester achieved a 10th-place finish on their return to the top flight, but the club's progress has since been slower than expected.

Despite an overhaul of his backroom team last summer, they have failed to make the play-offs and the Heineken Cup for the second year running - and Hill departed with the Warriors ninth in the table, with two matches left to play.

Worcester have lost all 10 Premiership away matches this season - and their overall form in the second half of the campaign has been poor.

Their only win in nine league games since Christmas came at home to Wasps on 1 March, although they have always been a safe distance from the threat of relegation.

Ryan, who won four England caps as a player, had spells at Saracens, Wasps, Newcastle and Bristol.

He then coached Bristol and Gloucester, leaving Kingsholm in 2009 after their Premiership title near miss.

But he will take charge of a Worcester squad that already appears to have done most of its summer trading.

Worcester's coaches in the Premiership era

And Worcester have already made eight signings.

Ignacio Mieres will arrive from Exeter, along with fellow stand-off Paul Warwick from Stade Francais and Bedford winger Paul Stephenson.

And there are so far five additions in the pack, Argentine duo Leonardo Senatore (Toulon) and hooker Agustin Creevy (Montpellier), who are both arriving from France, flanker Mike Williams from South African side Blue Bulls, Tongan prop Ofa Fanga'anuku from Glasgow Warriors and Cornish Pirates prop Paul Andrew.